Items related to The Poems of Alexander Pope. A One Volume Edition of...

The Poems of Alexander Pope. A One Volume Edition of the TWICKENHAM POPE. 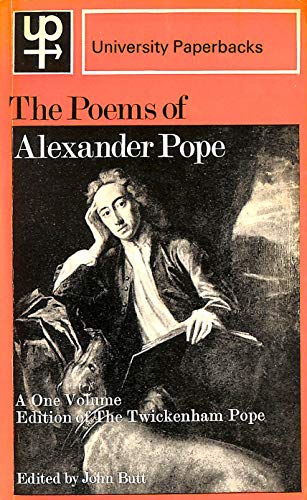 A splendid presentation of Pope's poems, excluding only his translations of Homer, this is the only one-volume edition that can lay claim to completeness and accuracy of text. It presents the corpus of Pope's poetry as printed in the highly praised Twickenham Edition, except for the 1712 version of The Rape of the Lock and other early versions of phrases preserved in the critical apparatus of the six-volume work. Pope's own notes to his poems are included, as well as a generous selection of the copious annotation in the Twickenham text. This reduced version of the unsurpassed standard edition of Pope will be of great value to all students and teachers of English literature. John Butt, Regius Professor of Rhetoric and English Literature at Edinburgh University, is general editor of the Twickenham Edition. "The publishers are surely right in claiming that 'this should for long remain the standard one-volume edition of Pope's poems.' The Twichenham edition ...has been a splendid achievement, and Professor Butt's distillation of the long labours of his fellow-editors is most commendable."-Times Literary Supplement.

ALEXANDER POPE (1688-1744) was an eighteenth-century English poet known for his satirical verse, for his translation of Homer, and for his use of the heroic couplet. Among his best-known works are "The Rape of the Lock," "An Essay on Criticism," and "The Dunciad."
CLAUDE RAWSON is a professor of English at Yale University. He is the author of several books on eighteenth-century writers, as well as numerous articles and reviews in academic journals and in the Times Literary Supplement, New York Times Book Review, and London Review of Books.