Items related to Piranha to Scurfy : And Other Stories

Ruth Rendell Piranha to Scurfy : And Other Stories

Piranha to Scurfy : And Other Stories 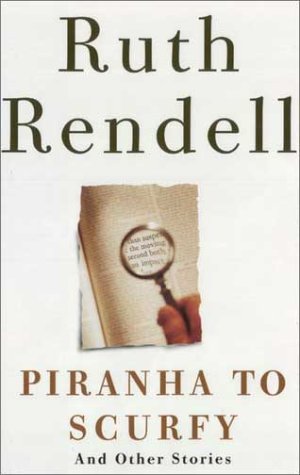 "Piranha to Scurfy" is a brooding story of a solitary, middle-aged man who devotes his life to writing scathing letters to newly-published authors. He does so in memory of his dead mother, who nurtured his love of accuracy, and his fervent desire to set things right. She herself is buried in the garden, for reasons that become clear as the story comes to its surprising end.

"The Wink" tells the story of a young woman, raped in a small English town, who has kept the event, and the identity of her assailant, secret for many years. During their inevitable encounters in town, the rapist has added to her humiliation by giving her a leering wink. In the end, the young woman exacts her revenge.

"High Mysterious Union" is a haunting and profoundly disturbing tale of a young man who borrows his friend's vacation home in remote, rural England to work on a literary translation. Told by his friend, after the fact, the story is full of foreboding and regret that she hadn't warned him of her strange experiences with the insular local townspeople.

These and the six other stories in this collection will keep readers transfixed.

The short story is, in many ways, the perfect medium for the audio book, and Ruth Rendell continues to be a passionate supporter of the form, providing some vintage entries in her latest collection, Piranha to Scurfy and Other Stories. In Penelope Wilton, Rendell has the perfect reader for this beguilingly disparate selection of tales, united by the usual cold-eyed Rendell narrative voice. Wilton has long been one of this country's finest actresses, equally adroit at comedy and the most demanding drama. Here, she finds a neutral, dispassionate voice that is the perfect conduit for Rendell's understated prose. The title story (the longest in the book, and a reference to an encyclopaedia entry) is something of a departure for Rendell: although her work has always been rich in elements of the macabre, this is her first full-scale horror tale, and a curious concoction it is. Taking equal parts of Stephen King (of whom a suave surrogate appears in the piece), the great English ghost story writer MR James and Rendell's own individual ground of twisted psychology, the tale is ostensibly an atmospheric study in burgeoning mental terror, as a lonely and socially maladroit man finds himself driven to the point of madness when the demon of a bestselling horror tale appears to infiltrate itself into his daily life. Wilton's reading never lays on the horrors with a trowel, allowing the steady accumulation of detail to make its telling effect. The characterisation, perfectly delineated by the actress, has all the dark fascination of Rendell's best work, and if that final shiver of horror isn't quite delivered, Rendell enthusiasts will be more than diverted. The other tales are equally compelling, with The Professional and The Astronomical Scarf being particularly well turned. There is also a pleasingly steady progression of mood throughout the tales, and Wilton finds the dark humour of such pieces as High Mysterious Unionas acutely as the fatalistic menace of the other tales.

'Plenty of style and many a wry reflection on the human condition ... Rendell's mission in these well-crafted short stories is ... to exhibit a cool skill in the telling of moral fables. This is serious entertainment.' (Express UK)

'In her writing, horror does not shake its gory locks directly at us, but hovers on the periphery of our inner vision, hidden among the ordinary, the everyday.' (The Sunday Telegraph)

'Rendell's mastery of the difficult short story genre is unsurpassed ... Her mesmerising capacity to shock, chill and disturb is unmatched.' (The Times)

1. Piranha to Scurfy and Other Stories

Book Description Crown Publishers, Inc., 2001. HARDCOVER. Condition: Fine. Dust Jacket Condition: Near Fine. First Edition. Canadian first edition, first printing. Contains number line 1 2 3 4 5 6 7 8 9 10. Virtually no wear to jacket. Jacket is in a Mylar cover. Jacket is NOT price clipped. Covers are clean and bright. Edges are sharp. No tears or creases. The book itself is in Near Fine condition. The binding is straight and tight. NO remainder mark.We're happy to provide pictures of any and all books for you, please just ask!. Seller Inventory # sku520010923

2. Piranha to Scurfy : And Other Stories

3. Piranha to Scurfy : And Other Stories

4. Piranha to Scurfy and Other Stories

7. Piranha To Scurfy and other stories (Fine First Edition)

8. Piranha to Scurfy and Other Stories