Items related to The Twelve 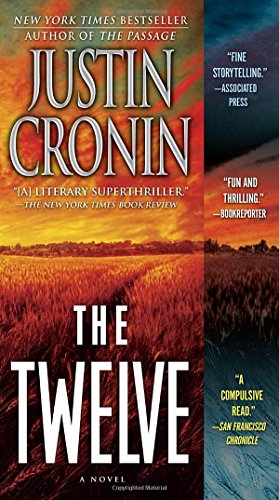 The end of the world was only the beginning.

In his internationally bestselling and critically acclaimed novel The Passage,Justin Cronin constructed an unforgettable world transformed by a government experiment gone horribly wrong. Now the scope widens and the intensity deepens as the epic story surges forward with . . .

In the present day, as the man-made apocalypse unfolds, three strangers navigate the chaos. Lila, a doctor and an expectant mother, is so shattered by the spread of violence and infection that she continues to plan for her child’s arrival even as society dissolves around her. Kittridge, known to the world as “Last Stand in Denver,” has been forced to flee his stronghold and is now on the road, dodging the infected, armed but alone and well aware that a tank of gas will get him only so far. April is a teenager fighting to guide her little brother safely through a landscape of death and ruin. These three will learn that they have not been fully abandoned—and that in connection lies hope, even on the darkest of nights.

One hundred years in the future, Amy and the others fight on for humankind’s salvation . . . unaware that the rules have changed. The enemy has evolved, and a dark new order has arisen with a vision of the future infinitely more horrifying than man’s extinction. If the Twelve are to fall, one of those united to vanquish them will have to pay the ultimate price.

A heart-stopping thriller rendered with masterful literary skill, The Twelve is a grand and gripping tale of sacrifice and survival.

Praise for The Twelve

“An undeniable and compelling epic . . . a complex narrative of flight and forgiveness, of great suffering and staggering loss, of terrible betrayals and incredible hope.”—Milwaukee Journal Sentinel

“The Twelve is even better than The Passage.”—The Plain Dealer

“Cronin is one of those rare authors who works on two different levels, blending elegantly crafted literary fiction with cliff-hanging thrills.”—Fort Worth Star-Telegram
From the Hardcover edition.

...as exhilarating as The Passage, with people variously trapped in hideous bleak labour camps, engaging in cage fights with virals (Cronin's name for vampires) or chained up for decades. (SUNDAY TIMES)