Items related to Birth to Three Matters: Supporting the Framework of...

Birth to Three Matters: Supporting the Framework of Effective Practice 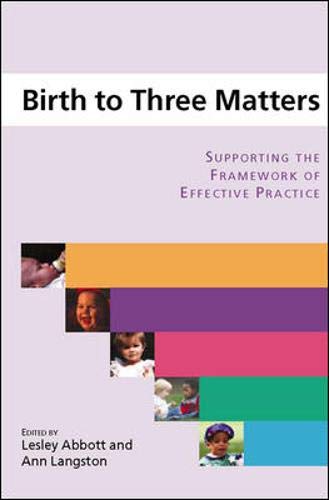 Birth to Three Matters is essential for all those involved in developing policy and providing care and education for children between birth and three.

It carefully examines the structure and content of the recently published Birth to Three Matters materials and explores a range of ‘matters’ that impact on the development of quality in early years settings. To do this, the editors have called upon a number of influential early years experts, many of whom were involved in the development of the Birth to Three Framework. The matters addressed in relation to the wider context of provision include national and international policy and research, practitioners, quality, continuity, Anti-discriminatory practice, inclusion, parents, safety and future training. This sound theoretical approach is supported and enhanced by a highly practical section, linked to the framework, which explores the role and implications for practice with very young children, of observation, play, interaction and creativity.

This book will support a variety of professionals involved in the development of policy, practice and quality in early years settings as well as students seeking to know and understand more about the Birth to Three Matters Framework and the issues that influence work with this age group.

Book Description Open University Press, 2004. Condition: Good. A+ Customer service! Satisfaction Guaranteed! Book is in Used-Good condition. Pages and cover are clean and intact. Used items may not include supplementary materials such as CDs or access codes. May show signs of minor shelf wear and contain limited notes and highlighting. Seller Inventory # 0335215416-2-4