Items related to Unreliable Sources: How the Twentieth Century was Reported

Simpson, John Unreliable Sources: How the Twentieth Century was Reported

Unreliable Sources: How the Twentieth Century was Reported 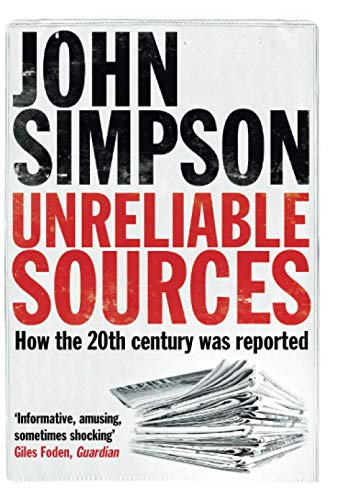 Through many decades of groundbreaking journalism, John Simpson has become not only one of the most recognisable and trusted British personalities, but has transferred his skill to books with multiple bestselling success. With his new book he turns his eye to how Great Britain has been transformed by its free press down the years. He shows how, while the press likes to pretend it's independent, they have enjoyed the power they have over the events they report and have at times exercised it irresponsibly. He examines how it changed the world and changed itself over the course of the last hundred years, from the creation of the Daily Mail and the first stokings of anti-German sentiment in the years leading up to the First World War, to the Sun's propping up of the Thatcher government, and beyond. In this self-analysis from one of the pillars of modern journalism some searching questions are asked, including whether the press can ever be truly free and whether we would desire it to be so.

Always incisive, brilliantly readable and never shy of controversy, Lies Like Truth sees John Simpson at the height of his game as one of Britain's foremost commentators.

'... John Simpson has written a wonderful book which informs and challenges... It is a wise book, full of Simpson's humour and acute observations. Service officers should read it to learn about themselves and, more importantly, about the ever-present media.' --RUSI Journal(Royal United Services Institute) John Mackinlay

'BBC World Affairs Editor John Simpson, no stranger himself to the occasional scoop, knows the British press inside out and in this absorbing account uses his knowledge to shed light on some of the 20th century's biggest stories.' --The Daily Express

Book Description PAPERBACK. Condition: New. Book Cover and ISBN may be different from US edition but contents as same US Edition. Excellent Quality,Quick delivery, We may ship the books from Asian regions for inventory purpose. Our courier service is not available at PO BOX. Seller Inventory # nt_9780330435635

3. Unreliable Sources: How the Twentieth Century was Reported Simpson, John

4. Unreliable Sources: How the 20th Century Was Reported

5. UNRELIABLE SOURCES: HOW THE 20TH