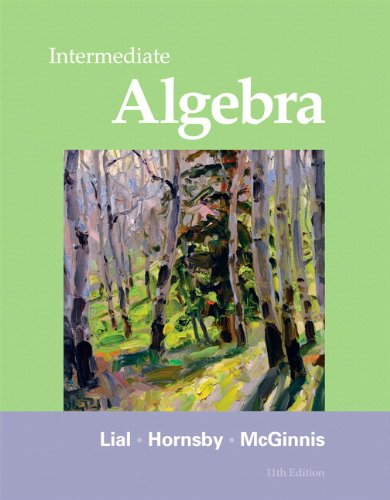 Marge Lial was always interested in math; it was her favorite subject in the first grade! Marge's intense desire to educate both her students and herself has inspired the writing of numerous best-selling textbooks. Marge, who received Bachelor's and Master's degrees from California State University at Sacramento, is affiliated with American River College. Marge is an avid reader and traveler. Her travel experiences often find their way into her books as applications, exercise sets, and feature sets. She is particularly interested in archeology. Trips to various digs and ruin sites have produced some fascinating problems for her textbooks involving such topics as the building of Mayan pyramids and the acoustics of ancient ball courts in the Yucatan.

When John Hornsby enrolled as an undergraduate at Louisiana State University, he was uncertain whether he wanted to study mathematics education or journalism. His ultimate decision was to become a teacher, but after twenty-five years of teaching at the high school and university levels and fifteen years of writing mathematics textbooks, both of his goals have been realized. His love for both teaching and for mathematics is evident in his passion for working with students and fellow teachers as well. His specific professional interests are recreational mathematics, mathematics history, and incorporating graphing calculators into the curriculum. John's personal life is busy as he devotes time to his family (wife Gwen, and sons Chris, Jack, and Josh), and has been an avid baseball fan all of his life. John's other hobbies include numismatics (the study of coins) and record collecting. He loves the music of the 1960s and has an extensive collection of the recorded works of Frankie Valli and the Four Seasons.

A native Midwesterner,Terry McGinnis received her Bachelor’s of Science in Elementary Education with a concentration in Mathematics from Iowa State University. She has taught elementary and middle school mathematics, and developed and implemented the curriculum used with her students. Terry has been involved in college mathematics publishing for over 20 years, working with a variety of authors on textbooks in both developmental mathematics and precalculus. After working behind the scenes on many of the Lial/Hornsby textbooks and supplements for over 10 years, Terry joined Margaret Lial and John Hornsby in 2002 as coauthor of their developmental mathematics series that includes Introductory Algebra, Intermediate Algebra, and Introductory and Intermediate Algebra. When not working, Terry enjoys spinning at a local health club, walking, and reading fiction. She is the devoted mother of two sons, Andrew and Tyler.

Buy Used
Condition: Good
Has little wear to the cover and... Learn more about this copy

Book Description Pearson, 2011. Hardcover. Condition: GOOD. Has little wear to the cover and pages. Contains some markings such as highlighting and writing. Supplemental materials are not guaranteed with any used book purchases. Seller Inventory # 0321760174_abe_gd

Book Description Condition: good. Item may not include associated media. Used books may have cover wear and markings inside. Â Access codes and supplements such as CDs or software are not guaranteed with used items. Seller Inventory # e1-524a

Book Description Pearson, 2011. Condition: Good. A+ Customer service! Satisfaction Guaranteed! Book is in Used-Good condition. Pages and cover are clean and intact. Used items may not include supplementary materials such as CDs or access codes. May show signs of minor shelf wear and contain limited notes and highlighting. Seller Inventory # 0321760174-2-4

Book Description Condition: Very Good. A quality text at a great price. And we ship fast. CDs & Access codes may not be included as is the case with most used books. Seller Inventory # 536575