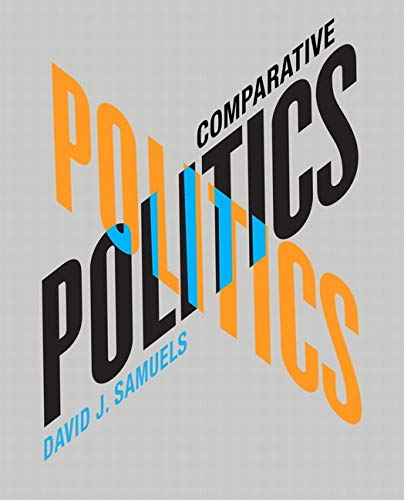 Debuting in its first edition and driven by a question-based approach, Comparative Politics shows readers how to do real comparative analysis while introducing them to political institutions, identities, and interests. This thematic survey uniquely balances the how–analytical knowledge–and the what–descriptive knowledge–to help readers make their own political arguments and to thus be more critically informed and engaged political participants.

“Comparative Politics and Case Studies in Comparative Politics are cutting-edge and high quality textbooks that many political scientists of my generation will consider using. They address many of my concerns with existing texts by providing instructors with a great deal of leeway in designing a syllabus. Each case study is written by a prominent scholar or rising comparativist and is nicely linked to the thematic survey. This would allow me the flexibility of using a different survey text or no survey text at all.”–Emmanuel Teitelbaum, George Washington University

“I have looked at many comparative politics textbooks and none of them have appealed to me the way that this one did right away. Some aim too high and ask far too much of students, losing them in a sea of concepts with few tools to make sense of them. Others aim too low and ask far too little of students, failing to challenge them on the essential themes and concepts of comparative politics. This one finds the middle ground by presenting topics in an interesting and engaging manner and challenging students to cultivate their analytical skills.”–Katy Crossley-Frolick, Denison University

“David Samuels helps students make sense of complex theoretical questions and approaches, and he applies them very effectively to case examples. This textbook beats all the alternatives; it is very well thought-out.”–Kenneth Roberts, Cornell University

“Samuels engages professors as well as students by making our field accessible without compromising the curiosities and complexities that make it so interesting. The study of institutions, interests, and identities introduces undergraduates to the politics of countries in the world through a rigorous lens of comparative analysis. Samuels raises the most interesting questions and puzzles within our field and guides the student through the methods of comparative politics science. To have a textbook that moves beyond a list of concepts and an historical chronology of countries is immensely satisfying.”–Lauretta Frederking, University of Portland

“I am delighted that the author recognizes how graduate-level comparative political scientists are trained and that he has brought this approach to the undergraduate level. This is useful training not only for budding comparative politics students but for those who seek to become informed world citizens.”–Jennifer White, University of Georgia

“Comparative Politics is a theory-centered introductory text that perfectly balances the substantive nature of our field with the level of accessibility necessary for an undergraduate class.”–Julie Mazzei, Kent State University

“I am impressed that Samuels does not shy away from introducing students to the major debates in comparative politics and having them evaluate competing arguments. In trying to get the students to think theoretically, he has definitely chosen an approach that will challenge the best students.”–Steve Barracca, Eastern Kentucky University

“This is a readable and well-organized exploration of major topics in comparative politics that brings together basic as well as more advanced topics. It provides students with examples of how to actually do comparative politics and prompts them to think through the major arguments of the field.”–Wendy N. Whitman Cobb, Santa Fe College

“David Samuels does a better job than any I have seen of discussing key themes in comparative politics in an intelligent and well-written way. He raises the big questions in a straightforward and engaged manner, and he does a good job of addressing them in comparative perspective with the American institutions that my students know well.”–Kevin Deegan-Krause, Wayne State University

“Samuels offers students a theoretically robust yet highly accessible introduction to the study of comparative politics. He clearly introduces core concepts and theories, offering compelling examples that encourage students to think through different ways of answering fundamental questions that define the field. I’m thrilled to see the strong focus on political identity in an introductory textbook.”–James Ross, University of Northern Colorado

“This work is thoughtfully and freshly conceived and focuses on a straightforward analysis of political outcomes instead of rehashing historical debates in comparative politics that are not germane to students just coming to the topic. David Samuels writes with an enthusiasm that will entice students, and his emphasis on comparative politics as a puzzle is something that I would like my students to assimilate.”–David Levenbach, Arkansas State University

“David Samuel’s innovative thematic survey and country casebook stand out as the most comprehensive material for introductory comparative politics courses. Throughout both, he successfully weaves the themes of institutions, identity and interests and demonstrates how these impact social, economic and political outcomes in different countries.”―Dauda Abubakar, University of Michigan―Flint

“I have been teaching introductory comparative politics for over four years now, and I have examined some fifteen textbooks for this class. Samuels’ textbook is one of the best, and I will strongly consider adopting it.”–Anca Turcu, University of Central Florida

David J. Samuels is Benjamin E. Lippincott Professor of Political Science at the University of Minnesota.