Items related to Why Does E=mc2?: (And Why Should We Care?)

Brian Cox; Jeff Forshaw Why Does E=mc2?: (And Why Should We Care?) 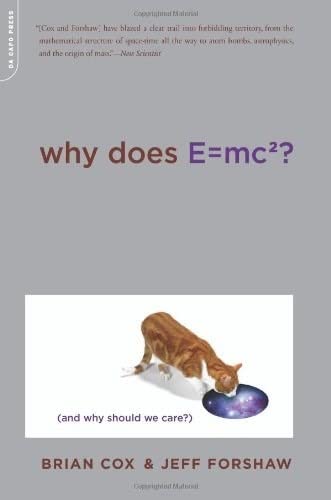 This is an engaging and accessible explanation of Einstein's equation that explores the principles of physics through everyday life. Professor Brian Cox and Professor Jeff Forshaw go on a journey to the frontier of 21st century science to consider the real meaning behind the iconic sequence of symbols that make up Einstein's most famous equation. Breaking down the symbols themselves, they pose a series of questions: What is energy? What is mass? What has the speed of light got to do with energy and mass? In answering these questions, they take us to the site of one of the largest scientific experiments ever conducted. Lying beneath the city of Geneva, straddling the Franco-Swiss boarder, is a 27 km particle accelerator, known as the Large Hadron Collider. Using this gigantic machine - which can recreate conditions in the early Universe fractions of a second after the Big Bang - Cox and Forshaw will describe the current theory behind the origin of mass. Alongside questions of energy and mass, they will consider the third, and perhaps, most intriguing element of the equation: 'c' - or the speed of light. Why is it that the speed of light is the exchange rate? Answering this question is at the heart of the investigation as the authors demonstrate how, in order to truly understand why E=mc2, we first must understand why we must move forward in time and not backwards and how objects in our 3-dimensional world actually move in 4-dimensional space-time. In other words, how the very fabric of our world is constructed. A collaboration between two of the youngest professors in the UK, "Why Does E=MC2?" promises to be one of the most exciting and accessible explanations of the theory of relativity in recent years.

To get at the origins of E=mc2, the poster-child for Einsteins's special theory of relativity, [Cox and Forshaw] must delve into deep principles of science and wield a good deal of mathematics. They do it well...They have blazed a clear trail into forbidding territory, from the mathematical structure of space-time all the way to atom bombs, astrophysics and the origin of mass. --The New Scientist

"The authors do a great job of answering the question in the book's title, and of tying it to the cutting edge of 21st century physics. But they do much more besides. First, they give a real sense of revelation as the
equation emerges from the seemingly unrelated concepts of space and time. Second, they're not afraid to take on questions often asked about the equation."
--BBC Focus Magazine

Brian Cox and Jeff Forshaw, two physicists, have managed to produce an account of relativity physics accessible to a wide range of various publics. If you're not a physicist (or not yet a physicist) and you want to understand what Einstein and relativity theory are all about, you would do well to read this book. The writing is clear, sparkling in places, and totally without vanity. Relativity theory, Einstein's supreme gift to us, is at the heart of the way science currently looks at physical reality, and anyone with an adventurous mind should be intrigued by what two smart physicists say about it in plain language... Read this book. It's your world, isn't it?
--The Huffington Post

"I can think of no one, Stephen Hawking included, who more perfectly combines authority, knowledge, passion, clarity, and powers of elucidation than Brian Cox. If you really want to know how Big Science Works and why it matters to each of us in the smallest way, then be entertained by this dazzlingly enthusiastic man. Can someone this charming really be a professor?"