Dalven, R. Introduction to Applied Solid State Physics: Topics in the Applications of Semiconductors, Superconductors, Ferromagnetism, and the Nonlinear Optical Properties of Solids

Introduction to Applied Solid State Physics: Topics in the Applications of Semiconductors, Superconductors, Ferromagnetism, and the Nonlinear Optical Properties of Solids 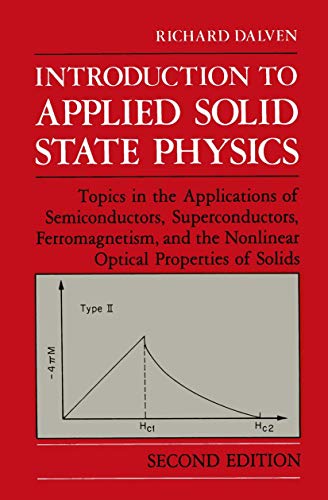 In addition to the topics discussed in the First Edition, this Second Edition contains introductory treatments of superconducting materials and of ferromagnetism. I think the book is now more balanced because it is divided perhaps 60% - 40% between devices (of all kinds) and materials (of all kinds). For the physicist interested in solid state applications, I suggest that this ratio is reasonable. I have also rewritten a number of sections in the interest of (hopefully) increased clarity. The aims remain those stated in the Preface to the First Edition; the book is a survey of the physics of a number of solid state devices and ma­ terials. Since my object is a discussion of the basic ideas in a number of fields, I have not tried to present the "state of the art," especially in semi­ conductor devices. Applied solid state physics is too vast and rapidly changing to cover completely, and there are many references available to recent developments. For these reasons, I have not treated a number of interesting areas. Among the lacunae are superiattices, heterostructures, compound semiconductor devices, ballistic transistors, integrated optics, and light wave communications. (Suggested references to those subjects are given in an appendix. ) I have tried to cover some of the recent revolutionary developments in superconducting materials.

Revised and expanded edition (1st was 1980) of a textbook for students who have already had an introductory course in solid state physics. Surveys the physics of numerous solid state electronic devices and materials, stressing the basic qualitative physics underlying the applications rather than the applications themselves. Annotation copyright Boo

Book Description PaperBack. Condition: New. Book Cover and ISBN may be different from US edition but contents as same US Edition. Excellent Quality, Service and customer satisfaction guaranteed! We may ship the books from Asian regions for inventory purpose. Our courier service is not available at PO BOX. Seller Inventory # k54441