Items related to This Sumptuous Church 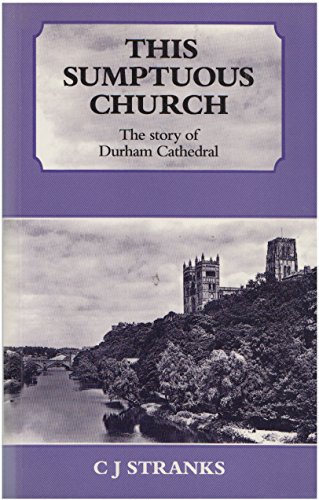 'Here's Richness!'. This is no-dry-as-dust history, but a chronicle of 'this sumptuous church' and the men who served it from its foundation in 995. In these pages we meet the Saxon saints, Cuthbert and Bede, the medieval monks and prince-bishops, the Reformers who believed that God could best be served by acts of vandalism, the comfortable eighteenth-century dignitaries, the nineteenth-century scholars who founded one of England's first post-Reformation universities and the men and women who have enabled the cathedral to renew its life in the twentieth century. There are also interesting minor characters, some of whom might have been created by Anthony Trollope. The Chapter of Durham has included in its day a naturalist who increased his collection of stuffed birds by presenting departing missionaries with small guns, and a distinguished medieval historian who is known to generations of anglers as the creator of 'a particularly seductive fly'. Contents: List of illustrations; Preface; 1. The Middle Ages: Pilgrims of Faith; The Norman Conquest; The Norman Cathedral; The Uncorrupt Body Translated; Usurpation and Chaos; The Magnificent Du Puiset; The Chapel of the Nine Altars; 'The Most Valiant Clerk in Christendom'; The Nevilles and the Raby Buck; Years of Growth and Splendour; 'The Old Flourishing Time'. 2. The Reformation: The New Age Begins; The Rising in the North; The Laudian Reaction; Royal Visits; Troubled Times; Cromwell's College; The Restoration; Ways of Preferment; The Exile and His Steward. 3. The Eighteenth Century and After: Rationalism and High Living; The Fabric in Great Decay; Sense and Sensibility in 1804; Opening St. Cuthbert's Tomb; Founding the University; Rearrangement and Renewal; Into a New Era by Peter Baelz. Notes; Appendix 1: An Eighteenth-Century Meal; Appendix 2: Bishops, Priors and Deans; Index

Book Description Paperback. Condition: Very Good. The book has been read, but is in excellent condition. Pages are intact and not marred by notes or highlighting. The spine remains undamaged. Seller Inventory # GOR004030667

Book Description Paperback. Condition: Used; Good. Dispatched, from the UK, within 48 hours of ordering. This book is in good condition but will show signs of previous ownership. Please expect some creasing to the spine and/or minor damage to the cover. Grubby book may have mild dirt or some staining, mostly on the edges of pages. Seller Inventory # CHL6029941

Book Description Paperback. Condition: Used; Good. Dispatched, from the UK, within 48 hours of ordering. This book is in good condition but will show signs of previous ownership. Please expect some creasing to the spine and/or minor damage to the cover. Seller Inventory # CHL6914973

Book Description Paperback. Condition: Very Good. Shipped within 24 hours from our UK warehouse. Clean, undamaged book with no damage to pages and minimal wear to the cover. Spine still tight, in very good condition. Remember if you are not happy, you are covered by our 100% money back guarantee. Seller Inventory # 6545-9780281046621

Book Description Paperback. Condition: Very Good. This Sumptuous Church This book is in very good condition and will be shipped within 24 hours of ordering. The cover may have some limited signs of wear but the pages are clean, intact and the spine remains undamaged. This book has clearly been well maintained and looked after thus far. Money back guarantee if you are not satisfied. See all our books here, order more than 1 book and get discounted shipping. Seller Inventory # 7719-9780281046621

This Sumptuous Church - the Story of Durham Cathedral