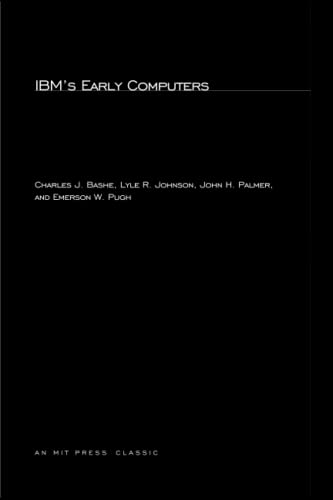 In describing the technical experiences of one company from the beginning of the computer era, this book unfolds the challenges that IBM's research and development laboratories faced, the technological paths they chose, and how these choices affected the company and the computer industry. It chronicles the transformation of IBM into a computer company in a remarkably few years, discussing projects that ended in frustration as well as the more successful ones, and providing a sense of the atmosphere, the people, and the decision-making processes involved during the company's rapid technological transformation. IBM's Early Computers is a unique contribution to the modern history of computers. It focuses on engineering alternatives rather than business and general management considerations and reveals the significance of imaginative solutions to problems in design and technology, from initial experiments with electronics in digital machines to the threshold of the System 360 era. This fair and balanced account of IBM's role in shaping today's electronic revolution identifies the individuals (both inside and outside the company) whose pioneering work influenced developments at IBM. The book's fourteen chapters briefly survey the card machine era and then cover electronic calculation, the magnetic drum calculator, the Defense Calculator and other first-generation products, ferrite core memories, magnetic tape, and disk storage development, programming, transistors, "Project Stretch" (which involved disappointments but led to one of IBM's greatest successes) high-speed printers, research, and new-product-line considerations.Charles J. Bashe, Lyle R. Johnson, John H. Palmer, and Emerson W Pugh are senior members of the staff at IBM's Thomas J. Watson Research Center, each with many years of technical and managerial experience in the developments they describe. IBM's Early Computers is included in the History of Computing Series, edited by I. Bernard Cohen and William Aspray.