Items related to Iron in the Soul (Penguin Modern Classics) 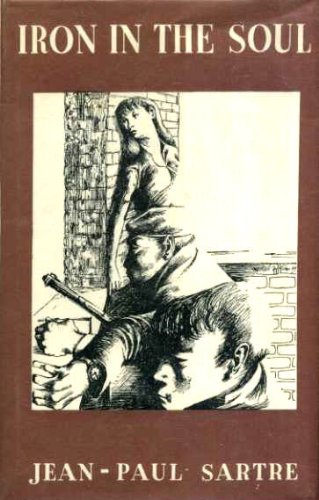 June 1940 was the summer of defeat for the French soldiers, deserted by their officers, utterly demoralized, awaiting the Armistice. Day by day, hour by hour, Iron in the Soul unfolds what men thought and felt and did as France fell. Men who shrugged, men who ran, men who fought and tragic men like Mathieu, who had dedicated his life to finding personal freedom, now overwhelmed by remorse and bitterness, who must learn to kill. Iron in the Soul, the third volume of Sartre's Roads to Freedom Trilogy, is a harrowing depiction of war and what it means to lose.

Philosopher, novelist, playwright and polemicist, Jean-Paul Sartre is thought to have been the central figure in post-war European culture and political thinking. His most well-known works, all of which are published by Penguin, include THE AGE OF REASON, NAUSEA and IRON IN THE SOUL.

Book Description Condition: Good. A+ Customer service! Satisfaction Guaranteed! Book is in Used-Good condition. Pages and cover are clean and intact. Used items may not include supplementary materials such as CDs or access codes. May show signs of minor shelf wear and contain limited notes and highlighting. Seller Inventory # 0241902886-2-4

Iron In The Soul

Book Description Hardcover. Condition: Good. No Jacket. Item is in good condition. Some moderate creases and wear. This item may not come with CDs or additional parts including access codes for textbooks. This may not have a dust jacket. Might be an ex-library copy and contain writing/highlighting. Photos are stock pictures and not of the actual item. Seller Inventory # DS-0241902886-3

Book Description Hardcover. Condition: GOOD. Spine creases, wear to binding and pages from reading. May contain limited notes, underlining or highlighting that does affect the text. Possible ex library copy, will have the markings and stickers associated from the library. Accessories such as CD, codes, toys, may not be included. Seller Inventory # 3383185393

IRON IN THE SOUL.