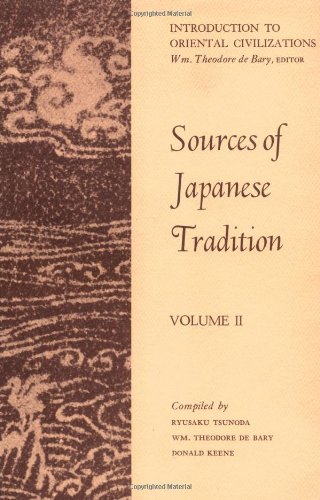 Since it was first published more than forty years ago, Sources of Japanese Tradition, Volume 2, has been considered the authoritative sourcebook for readers and scholars interested in Japan from the eighteenth century to the post-World War II period. Now greatly expanded to include the entire twentieth century, and beginning in 1600, Sources of Japanese Tradition presents writings by modern Japan's most important philosophers, religious figures, writers and political leaders. The volume also offers extensive introductory essays and commentary to assist in understanding the documents' historical settings and significance. Wonderfully varied in its selections, this eagerly anticipated expanded edition has revised many of the texts from the original edition and added a great many not included or translated before. New additions include documents on the postwar era, the importance of education in the process of modernization, and women's issues. Beginning with documents from the founding of the Tokugawa shogunate, the collection's essays, manifestos, religious tracts, political documents, and memoirs reflect major Japanese religious, philosophical, social and political movements. Subjects covered include the spread of neo-Confucian and Buddhist teachings, Japanese poetry and aesthetics, and the Meiji Restoration. Other documents reflect the major political trends and events of the period: the abolition of feudalism, agrarian reform, the emergence of poltical parties and liberalism, and the Sino-Japanese and Russo-Japanese Wars. The collection also includes Western and Japanese impressions of each other through Western religious missions and commercial and cultural exchanges. These selections underscore Japanese and Western apprehension of and fascination with each other. As Japan entered the twentieth century, new political and social movements -- Marxism, anarchism, socialism, nationalism, and feminism -- entered the national consciousness. Later readings in the collection look at the buildup to war with the United States, military defeat and American occupation. Documents from the postwar period echo Japan's struggle with its own history and its development as a capitalist democracy.

The richness of this new collection is difficult to overstate... Essential.--Choice

A superb aid for teaching and research.--Pacific Affairs