Items related to The Diamond Hunters 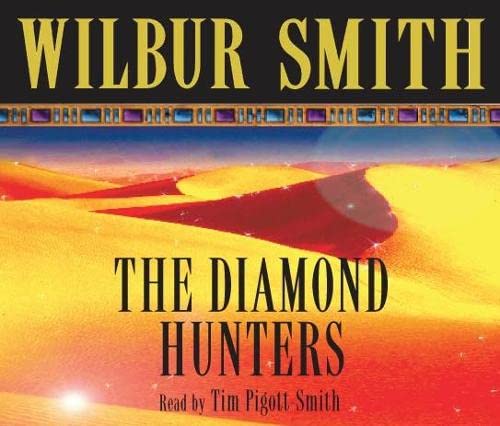 The Van Der Byl Diamond Company, willed by its founder to his son Benedict, turns out to be a bequest of hatred. For it is couched in such terms as to offer him the instrument of destruction of his bitterest rival. ‘Destroy Johnny’ is the old man’s implacable message. And so, consumed with envy for his own foster-brother, Benedict sets out in ruthless pursuit of this goal - and Johnny is plunged into a maelstrom of greed, vengeance and murder . . .

The Diamond Hunters moves from Cape Town to London and back, from the sandstorms of the South African coastal deserts to the icy wastes of the South Atlantic.

Violent action, suspense, and a background of the fascinating diamond world

"Wilbur Smith leaves fans feeling that they sailed alongside Sir Hal because the geography and the era appear so genuine. This is what makes a Smith book worth reading." --"Midwest Book Review "on "Monsoon" "Smith's novel is far more than your typical pirate script...A fascinating account...Smith deftly evokes not only the horrific but also the beautiful, particularly the lush landscape of Africa." --"The Washington Post Book World" on "Birds of Prey" "As usual, Smith...peoples his tale with unforgettable characters...Swashbuckling and sensuous, "Birds of Prey" is not for the faint-hearted. This latest epic transcends the average action-adventure yarn." --"The Orlando Sentinel" "A rich, compelling look back in time when history and myth intermingled." --"San Francisco Chronicle" on "River God" "Throughout "The Seventh Scroll," as in all Wilbur Smith novels, the plot twists and turns with constant surprises...This old-fashioned adventure novel keeps the reader enthralled all the way to its very exciting conclusion." --"The Washington Post Book World"

Book Description Macmillan Digital Audio, 2008. Audio CD. Condition: Good. Ex Library CD with usual stamps or stickers. Good condition is defined as: a copy that has been read but remains in clean condition. All of the pages are intact and the cover is intact and the spine may show signs of wear. The book may have minor markings which are not specifically mentioned. Most items will be dispatched the same or the next working day. Seller Inventory # mon0012785758