Items related to Visions of Science: Books and readers at the dawn of...

Secord, James A. Visions of Science: Books and readers at the dawn of the Victorian age

Visions of Science: Books and readers at the dawn of the Victorian age 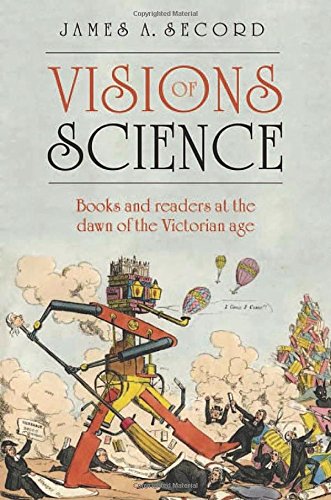 The early 1830s witnessed an extraordinary transformation in British political, literary, and intellectual life. New scientific disciplines begin to take shape, while new concepts of the natural world were hotly debated. James Secord, Director of the Darwin Correspondence Project, captures this unique moment of change by exploring key books, including Charles Lyell's Principles of Geology, Mary Somerville's Connexion of the Physical Sciences, and Thomas Carlyle's satirical work, Sartor Resartus. Set in the context of electoral reform and debates about the extension of education to meet the demands of the coming age of empire and industry, Secord shows how the books were published, disseminated, admired, attacked and satirized.

It is a useful reminder that science does not always advance in straight lines. (Dame Athene Donald, Book of the Year 2014, Times Higher Education)

concise and engaging survey of the popular science literature that transformed the book trade during the 1830s (Mike Jay, London Review of Books)

Visions of Science follows the progress of scientific ideas in the charged years surrounding the Reform Bill of 1832. More than anything, however, it is about the way ideas were exchanged. The result is a compelling work of book history that sheds as much light on the intricacies of the nineteenth-century publishing world as it does on geology or astronomy, and the dual project at the heart of Visions of Science is one of its many strengths. (Ushashi Dasgupta, Times Literary Supplement)

lucid and lively book ... This book will appeal not only to historians, but to literary scholars keen to move beyond the familiar canon of poetry and prose. And for many other readers, the book will be a fascinating introduction to the first generation to believe that the modern disciplinary sciences could transform the human condition. (Jo Elcoat, Chemistry World)

Visions of Science is a wonderfully lucid account of a complex and often misunderstood era that poses important questions about the way we understand both science and history. (The Guardian)

Elegantly written, Secords Visions of Science provides its readers with fresh insights into the turbulent decade around 1830, when science was changing from "a relatively esoteric pursuit" into one that would have a huge impact on "the everyday life of all men and women." (Science)

In an accessible style, and with a scholarly grasp of his protagonists, Secord examines seven works which recast the way that science was understood, setting their trajectories within a cultural and social context still dominated by a strongly Christian viewpoint. (Cambridge Online)

James Secord provides insightful analyses of seven works published at the dawn of the Victorian age ... He offers a compelling argument that his seven chosen works forged a new reading public that believed scientific knowledge was useful not only in narrow economic terms, but also in its potential for personal fulfilment, moral guidance and wider social regeneration. (Jo Elcoat, Science and Education)

Secords superb perspective as a historian opens up and amply justifies the value of examining the publication, materiality and reception of scientific literature in an understudied period of change. (Verity Burke, The British Society for Literature and Science)

James Secord is Professor of History and Philosophy of Science at the University of Cambridge, Director of the Darwin Correspondence Project, and a fellow of Christ's College. His research and teaching is on the history of science from the late eighteenth century to the present. He has published several books, including Controversy in Victorian Geology (Princeton, 1986) and editions of the works of Mary Somerville, Charles Lyell, and Robert Chambers. Victorian Sensation: The Extraordinary Publication, Reception, and Secret Authorship of Vestiges of the Natural History of Creation (Chicago, 2000), an account of the public debates about evolution in the mid-nineteenth century, won the Pfizer Prize of the History of Science Society and the award for the best book in history from the Association of American Publishers' Professional/Scholarly Publishing Division.