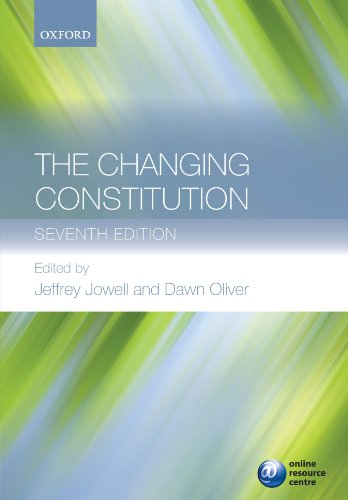 Since its first edition in 1985, The Changing Constitution has cemented its reputation for providing concise, scholarly and thought-provoking essays on the key issues surrounding the UK's constitutional development, and the current debates around reform. The seventh edition of this highly successful volume is published at a time of accelerated constitutional change in the wake of the 2010 general election and the formation of a Conservative / Liberal Democrat coalition committed to political reforms - including fixed term parliaments, a referendum on electoral reform, reform of the House of Lords, improved freedom of information, and reform of the House of Commons. This collection of essays provides thoroughly updated versions of previously-published chapters, plus an introductory overview of how the UK constitution is evolving and new chapters on the regulation of information and on the environment as a case study in regulation. Professors Jowell and Oliver have brought together fifteen expert contributors to offer an invaluable source of material and analysis for all students of constitutional law and politics.

The Changing Constitution has become firmly established as an invaluable guide to the current state of constitutional affairs in the United Kingdom. (The Student Law Journal)

The Changing Constitution is also part of a public law online resource centre which gathers together a superb list of web links, an excellent interactive timeline, and a useful list of Oxford 'news now'. (The Student Law Journal)

For anyone studying public law, particularly with a constitutional emphasis, The Changing Constitution is an important text. Its list of contributors is impressive, many of them being esteemed authors in their own right. It is rather unique, and feels much like a journal, given its issue based approach: this makes it ideal for essays and really understanding current issues. (The Student Law Journal)

Review from previous edition Since it's first publication in 1985, Jowell and Oliver has been widely regarded as an important supplement to recommended textbooks for Constitutional Law, addressing constitutional development and reform by distinguished academics. This new edition is arguably no exception. (The Law Quarterly Review)

Sir Jeffrey Jowell QC is Professor of Law at University College London, a practising barrister at Blackstone Chambers and the UK's Member of the Council of Europe's Commission for Democracy Through Law ('The Venice Commission').