Items related to The Silent Child: Exploring the World of Children Who...

Danon-Boileau, Laurent The Silent Child: Exploring the World of Children Who Do Not Speak

The Silent Child: Exploring the World of Children Who Do Not Speak 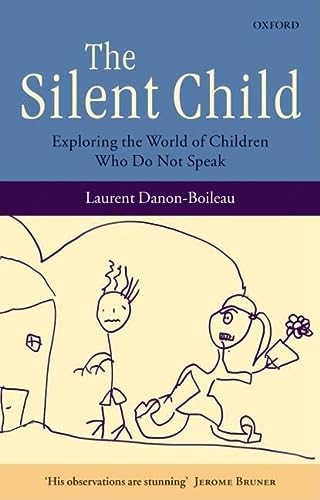 Laurent Danon-Boileau is one of France's most respected child psychoanalysts. In The Silent Child, he takes us into his office to watch him treat six children who cannot or will not speak. Reminiscent of Oliver Sacks's The Man Who Mistook His Wife for a Hat, this intriguing book introduces us to patients of surpassing strangeness, children who suffer from severe psychological difficulties that block their ability to speak or read. For instance, we watch as Danon-Boileau has sessions with Kim, who could name objects correctly, but when trying to express herself, would lapse into a private, unintelligible language. She could use words to name animals, but to express her wishes or her memories, she seemed to prefer using her hands. We meet Benjamin, who could not clearly distinguish between his imaginary world and the real world, a child whose mind is so taken up with the imaginary that he has neither the time nor the mental space for learning. And Rachid, who, at the age of 4, did not use language to communicate, but could read numbers consisting of several digits and count objects up to twelve. Perhaps most interesting is watching Danon-Boileau's trying to help these children, how he improvises, tries different approaches-playing games, drawing, reading, listening patiently, and using everyday objects in creative ways. Offering a fascinating portrait of an eminent psychoanalyst at work as well as a gold mine of insight into the roots and nature of language, The Silent Child takes us inside the lives of six young children struggling against great obstacles to learn to speak and read.

Review from previous edition Laurent Danon-Boileau's investigation of young children with difficulties in learning to speak combines the highest quality of case writing with speculations that are remarkable in their penetration ... His observations are stunning, and his commentary on them is equally sharp ... You sense a real genius at work ... Never have I seen such a subtle and resounding plea for cultivating the child's own meaning-making capacity wihout imposing meaning on him or her Jerome Bruner

In this intriguing little book, the author...explores the curious world of children who cannot speak. In so doing, he offers valuable advice on ways to search out answers from children by observing what they do. New York Times

In this absorbing account of the treatment of children who have great difficulty communicating in spoken language, Danon-Boileau, a practising child psychologist, draws on the case studies of six of his own patients. These observations coming from a caring and humane therapist will be of great use to those working in the field...as well as to parents of children with speech problems. Publisher's Weekly

'His observations are stunning' Jerome Bruner

1. The Silent Child: Exploring the World of Children Who Do Not Speak

2. The Silent Child: Exploring the World of Children Who Do Not Speak