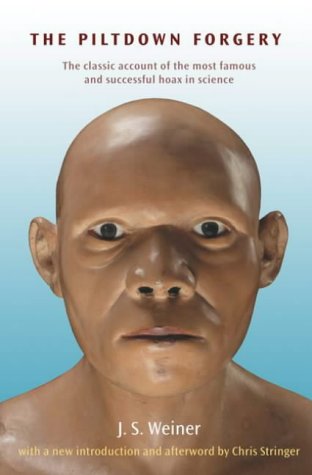 On 21 November 1953, one of the most fascinating puzzles in science was finally solved. Three scientists-Joseph Weiner, Kenneth Oakley, and Wilfrid Le Gros Clark-described their investigations into the important fossilized human remains found at Piltdown in Sussex in the early 1900s. Their conclusion was stunning: the remains, and the accompanying materials that supposedly verified them as ancient fossils, had all been faked. The discovery of Piltdown Man had been announced to the world in 1912 by an amateur fossil hunter, Charles Dawson, and the Keeper of Geology at the Natural History Museum in London, Arthur Smith Woodward, who had found fragments of a thickset skull and an ape-like lower jaw, along with other bones and stone tools. These fragments pointed to a species of early human who had lived in England a million years ago-a 'missing link' between apes and modern man. But, as Weiner and his colleagues were to reveal in 1953, the skull was a recent one, and the jaw had belonged to an orang-utan. These and many other 'finds' from Piltdown had been deliberately stained and tampered with to make them appear ancient, and the scientific establishment had been well and truly fooled. Widely praised from its first publication in 1955, The Piltdown Forgery remains the classic account of this story and its many players. In this fiftieth anniversary edition, Professor Chris Stringer, Head of Human Origins at the Natural History Museum in London, provides an introduction to this famous story, and an afterword containing the latest detective-work. Ever-increasing technological powers may one day reveal who did what, and why, but until then this remains an engrossing tale of mixed motives, captivating trickery, and competing egos: a tale fit to rival the works of Sir Arthur Conan Doyle (himself a player in this saga) at his best.

Review from previous edition Who committed the forgery, and why? And how came it that the fraudulent nature of the finds was not discovered when they were first examined by experts? The large section of the book that deals with these questions is as exciting as any detective novel, and much more interesting for it deals with historical facts, not fiction . . . it beats Sherlock Holmes at his best. (Times Literary Supplement)

Dr Weiner has made a first-class detective yarn. He puts the scientific findings in readable and understandable language and then, having established the fake, he considers the individuals involved. (Birmingham Post)

This book has three things that will endear it to the public―it is about one of the so-called "missing links"; it is closely concerned with that subject which the public has recently taken so much to its heart, namely archaeology; and―it is a mystery, a first-class mystery. (Daily Mail)

Dr Weiner was Reader in Physical Anthropology at Oxford University, and one of the scientists whose investigations resulted in the exposure of the Piltdown Man hoax. Prof. Chris Stringer is Head of Human Origins, Dept. of Palaeontology, The Natural History Museum.