Items related to Democratic Reform and the Position of Women in Transitional... 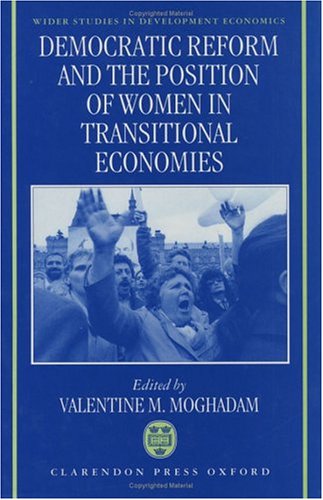 This volume explores the effects of the post-1989 developments in Eastern and Central Europe on the social and economic position of the women of these countries. It explains how the economic crisis and subsequent development, social breakdown, and changing institutions and practices of the state have an impact upon women's roles and status. The volume uses a combination of theoretical work on the fundamental questions of these `gender dynamics', and empirical studies on aspects such as educational attainment, social security provisions, political representation, and level and type of employment. Several of the papers use comparative analysis, drawing on previous research into women's position during development in the Third World, and under socialism in the years prior to 1989. Countries covered in empirical case studies are Russia, Estonia, Poland, the Czech and Slovak republics, the former East Germany, Hungary, and Bulgaria. The authors of the papers draw the conclusion that women are among the principal losers in the restructuring process, both through the rise in conservation cultures (eg greater religiosity and emphasis on women's reproductive role), and through the economic imperatives of competing in a market-based system. Contributors: Ireneusz Bialecki, Barbara Heyns, Valentina Bodrova, Maria Diechocinska, Barbara Einhorn, Monica Fong, Kaisa Kauppinen, Dobrinka Kostova, gail Lapidus, Valentine Moghadam, Liba Paukert, Anastasia Posdaskaya, Marily Rueschemeyer, Gordon Weil, Sharon Wolchik

"Must reading for anyone interested in understanding the male character of the transition process and the importance of gender as a political concept."--American Political Science Review