Items related to Fundamentals of Management: Essential Concepts and... 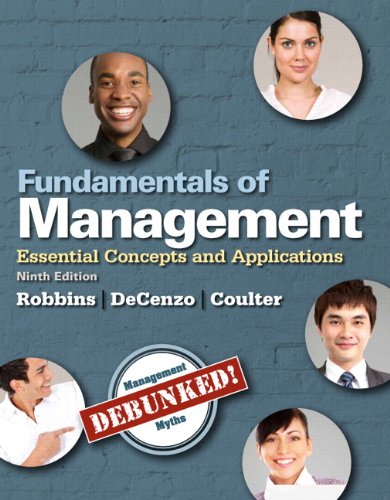 For Principles of Management courses. The practical tools of management presented through in-depth practice "Fundamentals of Managemen" "t" is a brief, paperback text that gives students more depth and breadth with practical tools to practice their management skills than any other textbook. The Ninth Edition introduces a new and exciting design and includes new chapter openers, case applications, and exercises. MyManagementLab for "Fundamentals of Managemen" "t" is a total learning package. MyManagementLab is an online homework, tutorial, and assessment program that truly engages students in learning. It helps students better prepare for class, quizzes, and exams resulting in better performance in the course and provides educators a dynamic set of tools for gauging individual and class progress. This program will provide a better teaching and learning experience for you and your students. Here s how:

Stephen P. Robbins received his Ph.D. from the University of Arizona. He previously worked for the shell Oil Company and Reynolds Metals Company and has taughtat the University of Nebraska at Omaha, Concordia University in Montreal, the University of Baltimore, Southern Illinois University at Edwardsville, and San Diego State University. Dr. Robbins; research interests have focused on conflict, power and politics in organizations, behavioral decision making, and the development of effective interpersonal skills. His articles on these and other topics have appeared in such journals as Business Horizons, California Management Review, Business and Economic Perspectives, International Management, Management Review, Canadian Personnel and Industrial relations, and Journal of Management Education.

Dr. Robbins is a best-selling textbook author in the areas of management and organizational behavior. His books have sold in excess of three million copies and are currently used by students in more than a thousand U.S. colleges and universities, and have been translated into16 languages.

Book Description Prentice Hall, 2014. Softcover. Condition: New. ***International Edition***Soft cover/Paperback*** Textbook printed in English. ***Brand New***. Most international edition has different ISBN and Cover design. Some book may show sales disclaimer such as "Not for Sale or Restricted in US" on the cover page but it is absolutely legal to use. All textbook arrives within 5-7business days. Please provides valid phone number with your order for easy delivery. Seller Inventory # d9780133506211