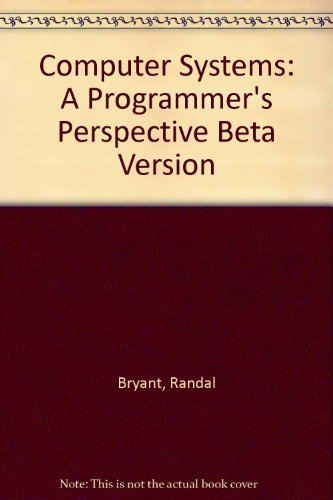 "Computer Systems: A Programmer's Perspective, Second Edition, introduces the important and enduring concepts that underlie computer systems by showing how these ideas affect the correctness, performance, and utility of application programs. Other systems books, written from a builder's perspective, describe how to implement the hardware or some portion of the system software, such as the operating system, compiler, or network interface. This book is written from a programmer's perspective, describing how application programmers can use their knowledge of the entire system to write better programs. Changes in hardware technology and compilers over the past decade have informed this major revision of the 2003 edition."--BOOK JACKET.

"I strongly believe that a programmer's perspective really helps in teaching the students the inner structure of computers." -- Kostas Daniilidis, University o f Pennsylvania "The book approaches the material in a way unlike any other, but similar to how I'd like to move our course." -- John Greiner, Rice University "This is an outstanding project and has a good chance of revolutionizing pedagogy in the field." -- Michael Scott, University of Rochester

Randal E. Bryant received the Bachelor's degree from the University of Michigan in 1973 and then attended graduate school at the Massachusetts Institute of Technology, receiving the Ph.D. degree in computer science in 1981. He spent three years as an Assistant Professor at the California Institute of Technology and has been on the faculty at Carnegie Mellon since 1984. He is currently the President's Professor of Computer Science and head of the Department of Computer Science. He also holds a courtesy appointment with the Department of Electrical and Computer Engineering.

He has taught courses in computer systems at both the undergraduate and graduate level for over 20 years. Over many years of teaching computer architecture courses, he began shifting the focus from how computers are designed to one of how programmers can write more efficient and reliable programs if they understand the system better. Together with Prof. O'Hallaron, he developed the course "Introduction to Computer Systems" at Carnegie Mellon that is the basis for this book. He has also taught courses in algorithms and programming.

Prof. Bryant's research concerns the design of software tools to help hardware designers verify the correctness of their systems. These include several types of simulators, as well as formal verification tools that prove the correctness of a design using mathematical methods. He has published over 100 technical papers. His research results are used by major computer manufacturers including Intel, Motorola, IBM, and Fujitsu. He has won several major awards for his research. These include two inventor recognition awards and a technical achievement award from the Semiconductor Research Corporation, the Kanellakis Theory and Practice Award from the Association for Computer Machinery (ACM), and the W. R. G. Baker Award and a Golden Jubilee Medal from the Institute of Electrical and Electronics Engineers (IEEE). He is a Fellow of both the ACM and the IEEE.

David R. O'Hallaron received the Ph.D. degree in computer science from the University of Virginia in 1986. After a stint at General Electric, he joined the Carnegie Mellon faculty in 1989 as a Systems Scientist. He is currently an Associate Professor in the Departments of Computer Science and Electrical and Computer Engineering.

He has taught computer systems courses at the undergraduate and graduate levels, on such topics as computer architecture, introductory computer systems, parallel processor design, and Internet services. Together with Prof. Bryant, he developed the course "Introduction to Computer Systems" that is the basis for this book.

Prof. O'Hallaron and his students perform research in the area of computer -systems. In particular, they develop software systems to help scientists and engineers simulate nature on computers. The best known example of their work is the Quake project, a group of computer scientists, civil engineers, and seismologists who have developed the ability to predict the motion of the ground during strong earthquakes, including major quakes in Southern California, Kobe, Japan, Mexico, and New Zealand. Along with the other members of the Quake Project, he received the Allen Newell Medal for Research Excellence from the CMU School of Computer Science. A benchmark he developed for the Quake project, 183.equake, was selected by SPEC for inclusion in the influential SPEC CPU and OMP (Open MP) benchmark suites.

Book Description Pearson College Div. Paperback. Condition: GOOD. Spine creases, wear to binding and pages from reading. May contain limited notes, underlining or highlighting that does affect the text. Possible ex library copy, thatâ ll have the markings and stickers associated from the library. Accessories such as CD, codes, toys, may not be included. Seller Inventory # 3150987466

Book Description Pearson College Div, 2001. Condition: Good. A+ Customer service! Satisfaction Guaranteed! Book is in Used-Good condition. Pages and cover are clean and intact. Used items may not include supplementary materials such as CDs or access codes. May show signs of minor shelf wear and contain limited notes and highlighting. Seller Inventory # 0130097578-2-4

Book Description Prentice Hall, 2001. Condition: Good. 1st. Ships from Reno, NV. Former Library book. Shows some signs of wear, and may have some markings on the inside. Seller Inventory # GRP95400232