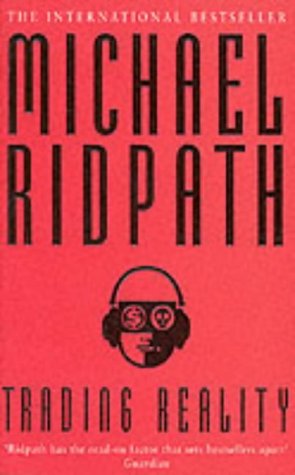 Mark Fairfax is a young, successful trader in the City. His older brother richard is a genius, who has built one of the world's leading virtual reality companies. When richard is found dead in a Scottish fishing village, mark steps into his shoes. He discovers that Richard has developed a system that can bring virtual reality into every home and office. Such a system could be worth billions of dollars to large Japenese or American companies capable of exploiting it; and there are those that fear it would change civilisation as we know it - for the worse. Mark has to learn quickly as he is thrust into a world which he barely understands, where he can trust no one. As he struggles to save to save his brother's fledgling company from bankruptcy and unwelcome predators, he realizes that his own life is in danger. Mark needs all his trader's nerve and quick thinking to survive.

Writing a second novel
What should I write for my second novel, after the success of my first, Free To Trade?

My first idea was simply to write Free To Trade again, changing the plot and characters slightly. But my German editor gave me some wise advice: write about something else that you are interested in. And so I decided to write about virtual reality.

I worked for three years for a venture capital company called Apax Partners. We invested in a small virtual reality company - Virtuality. It was one of the world leaders in the field, and dominated the market for VR entertainment systems. It had a bright future, but very little cash. Apax gave it some, and two years later the company floated on the stock exchange, giving Apax a profit of ten times its initial investment.

The whole process had been very exciting, and fraught with risk. The company seemed to be constantly lurching from boom to bust month by month. Personalities were important, and the stakes were high. From this, Trading Reality was born.

A sad postscript is that in early 1997 Virtuality did in fact go bust, The VR market took too long to take off, some management mistakes were made, and, inevitably, there wasn't enough cash.

If you would like to find out more about me or my books, please visit my website.

Book Description Arrow Books Ltd. Paperback. Condition: Very Good. A copy that has been read, but remains in excellent condition. Pages are intact and are not marred by notes or highlighting, but may contain a neat previous owner name. The spine remains undamaged. At ThriftBooks, our motto is: Read More, Spend Less. Seller Inventory # G0099416751I4N00

Book Description Arrow Books Ltd 18/09/1997, 1997. Condition: Very Good. This book is in very good condition and will be shipped within 24 hours of ordering. The cover may have some limited signs of wear but the pages are clean, intact and the spine remains undamaged. This book has clearly been well maintained and looked after thus far. Money back guarantee if you are not satisfied. See all our books here, order more than 1 book and get discounted shipping. . Seller Inventory # 7719-9780099416753

Book Description Arrow Books Ltd 18/09/1997, 1997. Condition: Very Good. Shipped within 24 hours from our UK warehouse. Clean, undamaged book with no damage to pages and minimal wear to the cover. Spine still tight, in very good condition. Remember if you are not happy, you are covered by our 100% money back guarantee. Seller Inventory # 6545-9780099416753