Items related to Maynard and Jennica 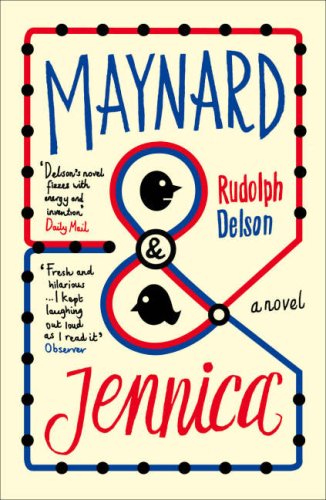 'Reading this book is like stepping into a Manhattan party full of wisecracking neurotics - except it's a great deal funnier. Rudolph Delson's novel fizzes with energy and invention ... A refreshing and quirky first novel.' Daily Mail

'Rudolph Delson joins a constellation of bright young things whose most prominent star is Jonathan Safran Foer. It is an effortless read.' Angel Gurria-Quintana, F.T.

'Maynard and Jennica works brilliantly as a love story - and the description of their falling is so perfect, true, adorable, unique and familiar that reading it feels almost intrusive. But Delson, in his first novel, has done something much more ambitious than a fuzzy rom-com. This novel is a quirky delight. I was as smitten as Maynard was with Jennica when he first saw her n the subway.' Nicola Barr, Scotland on Sunday

'One of the most charming, funny love stories you'll have come across in a long time. Told in a seductive between-you-and-me style by 35 different narrators, this is a hymn not only to unlikely relationships everywhere but to New York itself.' Image Magazine, Book of the Month

A comic love-story, set in and around New York at the beginning of the 21st century. Maynard Gogarty is bored, with what he's not quite sure, but he's definitely bored. He's a tweed-suit-wearing, perennially glum thirty something living in a Manhattan flat secretly paid for by his crabby grandmother, and is nursing a short film career that shows no signs of development. Plus he's misanthropic and an unhappy dilettante -- a real catch. But recently he's turned over a new leaf: he's decided, whatever befalls him, he's going to be happy. Enter Jennica Green, who seems to have it all: a Princeton graduate with a high-paying city job. But then again, she's the kind of girl who spends two weeks organising a trip to a county fair, which might explain why she is single and looks like remaining so. When Maynard glimpses this Jewish Bridget Jones on a blazingly hot subway ride, what are the odds!?Set either side of 9/11, Maynard and Jennica's courtship is narrated by our heroes and their many, many observers, among them all four parents (three living), a Russian-German-Israeli scam artist (and Maynard's current wife), a rapper with a linguistics background, a macaw, and an adolescent trumpeter.

On the face of it, 'Maynard & Jennica' is about many things: a tree homicide, New York City's real estate boom, hip-hop sampling, the 1989 San Francisco earthquake, the Jewish intermarriage crisis, subway emergency brake etiquette, the tournament rules of scrabble, the naming of cats. At its heart though, this brilliant first novel with its menagerie of voices is a simple love story, as touching as it is hilarious.