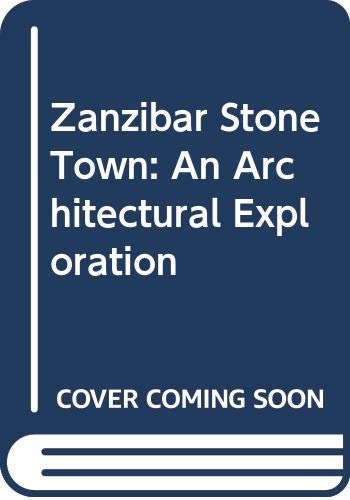 The architecture of Zanzibar is a unique synthesis between the east African coast and the lands across the Indian Ocean, reflecting social and cultural interaction between the regions over more than 2000 years. Four major streams have merged here to give birth to a fascinating amalgam: The Swahili building tradition developed along the coast over more than a millennium. The elegant simplicity of the massive Omani square houses introduced from the late eighteenth century. The extrovert Indian embellishment added during the nineteenth. The colonial intervention during the twentieth century which made itself more palatable by orientalising itself. These traditions are expressed most sharply in the religious institutions associated with them, the mosques, the temples and the churches, and in the Zanzibar doors, but they are much more integrated in domestic architecture.

Book Description Gallery Publications. Paperback. Condition: GOOD. Spine creases, wear to binding and pages from reading. May contain limited notes, underlining or highlighting that does affect the text. Possible ex library copy, will have the markings and stickers associated from the library. Accessories such as CD, codes, toys, may not be included. Seller Inventory # 3260910575

Book Description Gallery Publications. Paperback. Condition: Very Good. No Jacket. A copy that has been read, but remains in excellent condition. Pages are intact and are not marred by notes or highlighting, but may contain a neat previous owner name. The spine remains undamaged. At ThriftBooks, our motto is: Read More, Spend Less. Seller Inventory # G9987667104I4N00

Book Description Galley Publications, Tanzania, United Republic of, Zanzibar, 2008. Paperback. Condition: Very Good. The book has been read, but is in excellent condition. Pages are intact and not marred by notes or highlighting. The spine remains undamaged. Seller Inventory # GOR002839954

Book Description Gallery Publications, 2001. Condition: Good. A+ Customer service! Satisfaction Guaranteed! Book is in Used-Good condition. Pages and cover are clean and intact. Used items may not include supplementary materials such as CDs or access codes. May show signs of minor shelf wear and contain limited notes and highlighting. Seller Inventory # 9987667104-2-4