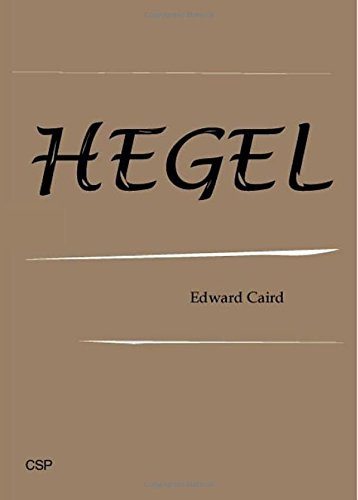 The book is the analysis of the works of one important philosopher by another. Edward Caird is without doubt one of the leading Scottish philosophers of the late nineteenth century, and an important British Idealist. That his work (as with the work of other British Idealists) has been influenced by Hegel and other German Idealists cannot be denied. Yet it is not a straightforward influence, and one can discern Caird s imprint in every passage of the present book. As a result of the presence of both personalities, Caird s and Hegel s, in the present work, the book is not akin to a scholarly analysis of Hegel written today. It is however, characterised by a remarkably smooth flow of its material. Caird takes us through Hegel s life and all the influences that shaped his thought quite effortlessly. Hegel s time at school and university, his years as a private tutor at Berne and Frankfurt, the period at Jena, his professorship at Heidelberg and Berlin, is described as lyrically as Hegel s central philosophical concerns, from his thoughts on the central problem of philosophy to his logic. An important book for scholars of Hegel, of British Idealism, as well as for enthusiasts of either thinker.