Items related to A History of the World in 100 Objects

MacGregor, Dr Neil A History of the World in 100 Objects 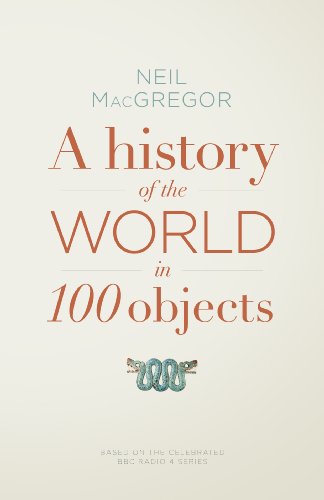 This book takes a dramatically original approach to the history of humanity, using objects which previous civilisations have left behind them, often accidentally, as prisms through which we can explore past worlds and the lives of the men and women who lived in them. The book's range is enormous. It begins with one of the earliest surviving objects made by human hands, a chopping tool from the Olduvai gorge in Africa, and ends with an object from the 21st century which represents the world we live in today.

Neil MacGregor's aim is not simply to describe these remarkable things, but to show us their significance - how a stone pillar tells us about a great Indian emperor preaching tolerance to his people, how Spanish pieces of eight tell us about the beginning of a global currency or how an early Victorian tea-set tells us about the impact of empire. Each chapter immerses the reader in a past civilisation accompanied by an exceptionally well-informed guide. Seen through this lens, history is a kaleidoscope - shifting, interconnected, constantly surprising, and shaping our world today in ways that most of us have never imagined. An intellectual and visual feast, it is one of the most engrossing and unusual history books published in years.

A History of the World in 100 Objects ... has been a triumph: hugely popular, and rightly lauded as one of the most effective and intellectually ambitious initiatives in the making of 'public history' for many decades. (John Adamson Sunday Telegraph)

Allen Lane has done Mr MacGregor proud... The objects have been beautifully photographed, Mr MacGregor's voice comes through distinctively and his arguments about the interconnectedness of disparate societies through the ages are all the stronger for the detail afforded by extra space. A book to savour and start over (Economist)

This is a story book, vivid and witty, shining with insights, connections, shocks and delights (Gillian Reynolds Daily Telegraph)

The style is authentic, personal and humorous. MacGregor could not have skewered our pretensions better...Look on our works, ye mighty, and despair (Andrew Roberts Financial Times)

The landmark BBC Radio 4 series that tells the story of humanity through 100 man-made objects from the British Museum's unique collection.

4. History Of The World In 100 Objects,A MacGregor, Neil