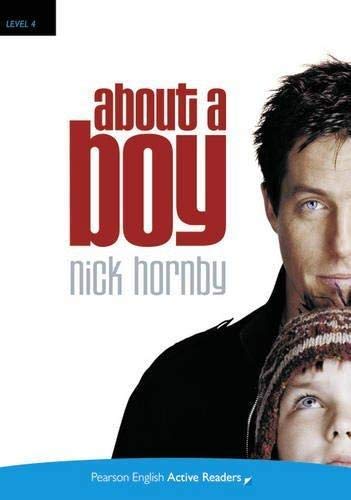 Will Freeman wants an easy life with no responsibilities. But then he meets Marcus – an unusual twelve year old boy with serious problems.
About a Boy is a modern classic – a very funny story about a very serious subject: love. It’s also a popular movie starring Hugh Grant.

Will Lightman is a Peter Pan for the 1990s. At 36, the terminally hip North Londoner is unmarried, hyper-concerned with his coolness quotient, and blithely living off the royalties of his father's novelty song. Will sees himself as entirely lacking in hidden depths--and he's proud of it! The only trouble is, his friends are succumbing to responsibilities and children, and he's increasingly left out in the cold. How can someone brilliantly equipped for meaningless relationships ensure that he'll continue to meet beautiful Julie Christie-like women and ensure that they'll throw him over before things get too profound? A brief encounter with a single mother sets Will off on his new career, that of "serial nice guy". As far as he's concerned--and remember, concern isn't his strong suit--he's the perfect catch for the young mother on the go. After an interlude of sexual bliss, she'll realize that her child isn't ready for a man in their life and Will can ride off into the Highgate sunset, where more damsels apparently await. The only catch is that the best way to meet these women is at single-parent get-togethers. In one of Nick Hornby's many hilarious (and embarrassing) scenes, Will falls into some serious misrepresentation at SPAT ("Single Parents--Alone Together"), passing himself off as a bereft single dad: "There was, he thought, an emotional truth here somewhere, and he could see now that his role-playing had a previously unsuspected artistic element to it. He was acting, yes, but in the noblest, most profound sense of the word."

What interferes with Will's career arc, of course, is reality--in the shape of a 12-year-old boy who is in many ways his polar opposite. For Marcus, cool isn't even a possibility, let alone an issue. For starters, he's a victim at his new school. Things at home are pretty awful, too, since his musical therapist mother seems increasingly in need of therapy herself. All Marcus can do is cobble together information with a mixture of incomprehension, innocence, self-blame, and unfettered clear sight. As fans of Fever Pitch and High Fidelity already know, Hornby's insight into laddishness magically combines the serious and the hilarious. About a Boy continues his singular examination of masculine wish-fulfilment and fear. This time, though, the author lets women and children onto the playing field, forcing his feckless hero to leap over an entirely new--and entirely welcome--set of emotional hurdles.

“Nick Hornby’s ear for contemporary dialogue is so acute that it’s an added pleasure to hear rather than read his latest novel... Convincing and moving.”
Independent 16/5/98