Items related to A Plain Cookery Book for the Working Classes

A Plain Cookery Book for the Working Classes 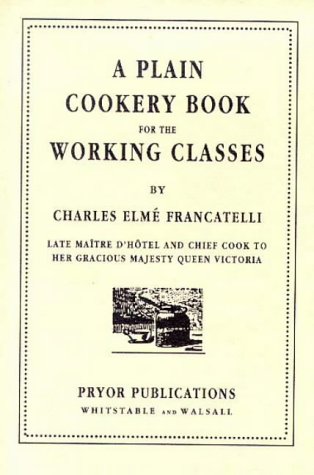 ABOUT THIS BOOK;2006 reprint of the 1861 classic from Charles Francatelli. Includes original adverts etc, 242 recipes with economy in mind for those who were less well off. Includes how to make gruel, or a large quantity of soup for distribution to the poor, sheeps head broth, baked tripe, meat panada and many others. Pocket book size. Softback intact and clean and undamaged. I have loaded an image of this book onto Amazon. Click on the title to check my image out for condition etc. Contact me for further information via Amazon.

A facsimile of an 1862 edition, written by a former Chief Cook to Her Majesty the Queen. The book contains cheap, nourishing recipes from simple, everyday fare to more tasty dishes for festive occasions. Recipes include "iceland-moss jelly" and blancmange (for patients of "extreme delicacy").

Charles Elme Francatelli (1805-1876) was an Anglo-Italian chef who was chief cook to Queen Victoria. His other works include The Modern Cook and The Cook's Guide.