Items related to The Metal of the Dead

Concha Espina The Metal of the Dead

The Metal of the Dead 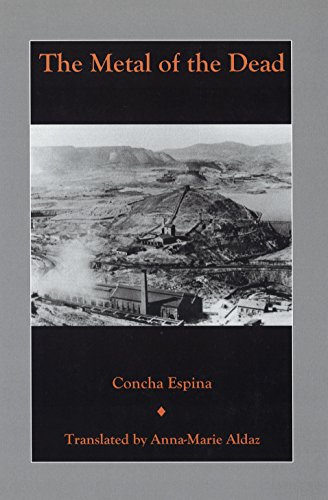 A complex novel with an epic cast of characters, Concha Espina's 'The Metal of the Dead' offers a documentary account of the events leading up to the 1917 workers' strike against the unfair labor practices of the Rio Tinto Ltd., the multinational conglomerate managing Spain's oldest copper mine. Intertwined with a detailed chronicle of social unrest and highly technical descriptions of the mines' geological structure and of different mining operations, are the romantic relationships of three feminine protagonists: Aurora, an angelic young woman from Spain's northern highlands, who is engaged to Gabriel Suarez, a miner who becomes an anarchist; Rosario, a newspaper reporter from Madrid, who falls in love with Aurelio Echea, the Socialist union leader, who, like several other characters in the novel, is based on a real-life figure; and Casilda, a passionate Andalusian beauty, who, like Bizet's Carmen, spurns the man who loves her, while yearning for one who resists her charms.

Anna-Maria Aldaz is Professor of Spanish at Northern Arizona University

Susan Kirkpatrick provides an overview of the period, and Anna-Marie Aldaz adds a discussion of Spanish versification as well as biographical sketches of the twenty-one poets whose works bring alive the first decades of women's emergence as a force in the Spanish literary world.

1. METAL OF THE DEAD

Book Description RL, 2003. Hardback. Condition: NEW. 9780838755457 This listing is a new book, a title currently in-print which we order directly and immediately from the publisher. Print on Demand title, produced to the highest standard, and there would be a delay in dispatch of around 10 working days. For all enquiries, please contact Herb Tandree Philosophy Books directly - customer service is our primary goal. Seller Inventory # HTANDREE01729969

2. METAL OF THE DEAD

3. METAL OF THE DEAD