Items related to Fair Play: The Ethics of Sport

Fair Play: The Ethics of Sport 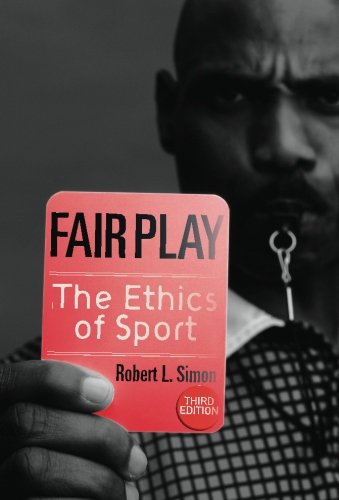 In this updated third edition, Simon (philosophy, Hamilton College) provides a philosophical analysis of the ethics of competitive athletics. A critique of moral and ethical relativism is offered in the introductory chapter in order to establish the justifiability of moral judgments made in subsequent sections. Simon defends competition against its critics as being, ideally, a "mutual quest for excellence," as opposed to a mere manifestation of selfishness, and he applies internal and external hypotheses as regards the origin of sports morality to particular issues of sportsmanship and fairness. New to the third edition is an examination of genetic enhancement and sports. Other moral and ethical issues and dilemmas explored include the use of performance-enhancing drugs, gender equity in sports, the commercialization of sports, violence, collegiate athletics, and the role of sports in moral education.

"This third edition of Fair Play is like those that preceded it-accessible, intelligent, persuasive, and well written. But Professor Simon has improved the book by including new information, most notably on the issues of genetic enhancement and intercollegiate athletic reform. Now, more than ever before, Fair Play stands out as the premier text in the area." -Scott Kretchmar, Pennsylvania State University "Robert Simon's new edition of Fair Play is, simply put, the best book of its kind in the literature. The new section on genetic enhancement and the expanded section on the moral quandaries of intercollegiate sports are welcome, not to mention timely, additions. What's more, the book is a compelling read, free of jargon, persuasively argued, and teeming with incisive commentary." -William Morgan, University of Southern California "Since, as Professor Simon says, sports play a major role in the lives of Americans, reflection on sports raises issues that not only have intrinsic interest but also go beyond the bounds of sport itself. The role of philosophy is to critically examine the complex issues in sports and our beliefs about them. Simon is a master at this. This third edition builds and expands these evaluations, especially in a time when sports in the U.S. are undergoing intense moral scrutiny. Readers will find this edition replete with contemporary examples, expanded discussions of performance enhancement drug use and of issues in intercollegiate sports, and a new section on genetic enhancement. This edition provides deeper insight into major issues in the philosophy of sport, and its accessibility makes it a must read for anyone who is interested in sports or interested in the role sports play in America." -Jan Boxill, The University of North Carolina at Chapel Hill

Robert L. Simon is Marjorie and Robert W. McEwen Professor of Philosophy at Hamilton College. A past fellow at the Rockefeller Foundation and National Endowment for the Humanities, he has also served as president of the International Association for the Philosophy of Sport. His books include The Individual and the Political Order, Neutrality and the Academic Ethic, and The Blackwell Guide to Political and Social Philosophy, and he is on the editorial board of the Journal of the Philosophy of Sport.

2. Fair Play: The Ethics of Sport