Items related to A Distant Prospect 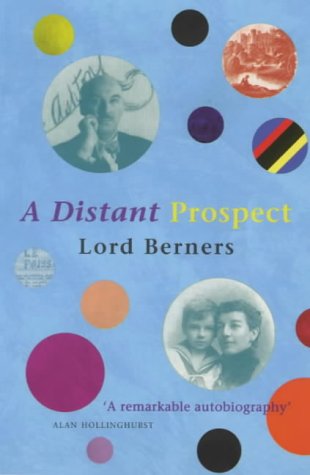 A Distant Prospect is the second volume of Lord Berners's perfectly formed, hilarious, and beautifully written memoirs. Berners was a great English eccentric, a composer, novelist, painter and conspicuous aesthete whose friends included Gertrude Stein, Diaghilev and Sitwell. The character of Lord Merlin in Nancy Mitford's The Pursuit of Love is based on Lord Berners, who would dip his pigeons into basins of magenta, green and ultramarine so that when released they resembled, Mitford wrote, 'a cloud of confetti in the sky'. These memoirs are classics of their kind. 'Autobiography of the very finest quality. Having enjoyed in the course of reading it the loudest and longest laughs I have enjoyed in the last two years I am quite incapable of making any critical observations. I found the book enchanting from cover to cover' Compton Mackenzie, Daily Mail

There are a couple of words that could be used to describe this book. One is "darling"; another is "bijou" ("a jewel, a trinket"); a third might be "class-bound", because the world of this memoir is (a couple of Windsor street walkers aside) unashamedly upper class. But we can forgive him that: Berners writes with so insouciant an elegance and precision, and the whole is redolent of the brilliant eccentricity recently captured in Mark Armory's lovely biography of the man (Lord Berners: the Last Eccentric.

A Distant Prospect picks up from Berners' first slim volume of memoirs, First Childhood and takes us through schooldays at Eton in the early years of the 20th century. We get a good sense of the singularity of the young Berners: "Once, when a particularly fatuous friend of my mother's, Colonel Stokes, said to me, "Well young man, what is your aim in life?" I replied, "Not to have to answer silly questions." But I felt that this sort of thing really didn't do me any good and it upset my mother." Berners was close to his mother, who figures largely in this book. In conversation with a particularly earnest clergyman, Mr Prout, she reacts to his use of the phrase "the idle rich": "Oh but Mr Prout, all the rich people I know are always very busy. They always have a lot to do." "I don't count hunting or shooting," Mr Prout replied, "or going to parties." "Why not?" my mother asked and the subject was dropped.

But if some of the antics of the upper classes seem remote to millennial Britain, others don't; Berners talks (for instance) about the homosexuality of Eton in ways reminiscent of, as it might be, the discourse of Michael Portillo--"it was merely the ebullition of puberty...those who are sexually normal will soon abandon this kind of nonsense for the real thing." A fascinating glimpse into a certain mind-set. -- Adam Roberts

The memoirs of a quintessential eccentric, outrageously funny and beautifully written

Book Description Condition: Good. Ships from the UK. Former library book; may include library markings. Used book that is in clean, average condition without any missing pages. Seller Inventory # 19259618-20

Book Description Paperback. Condition: Good. Minor shelf wear Good condition is defined as: a copy that has been read but remains in clean condition. All of the pages are intact and the cover is intact and the spine may show signs of wear. The book may have minor markings which are not specifically mentioned. Most items will be dispatched the same or the next working day. Seller Inventory # wbb0017652914

Book Description Paperback. Condition: Very Good. The book has been read, but is in excellent condition. Pages are intact and not marred by notes or highlighting. The spine remains undamaged. Seller Inventory # GOR003713447

Book Description Paperback. Condition: Very Good. Yellowing to pages. Appears unread, may have minor damage from transit/storage. Next day dispatch from the UK (Mon-Fri). Please contact us with any queries. Seller Inventory # mon0000441009