Items related to Imperial Marriage: An Edwardian War and Peace 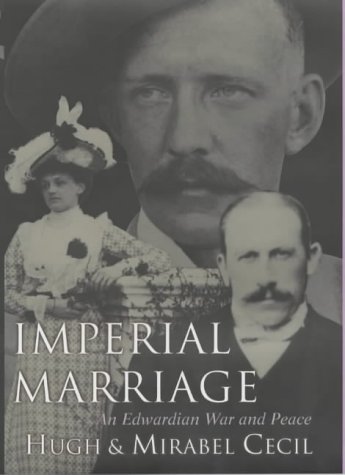 Certain lives epitomize an age, its glamour, its successes, and its broken dreams. Such were the lives of Lord Edward Cecil, his wife Violet, and Alfred Milner with whom she fell in love.

The adventurous Guards officer Edward Cecil married Violet Maxse in 1894, as Britain reached its imperial zenith. During the Boer War, as Chief Staff Officer to Baden-Powell, he was besieged at Mafeking, while in Cape Town Violet, young, attractive and enterprising, fell in love with Alfred Milner, the High Commissioner responsible for British policy. Her love for him dominated the rest of her life.

This book is also a picture of the British aristocratic world during its last period of real influence. As Foreign Secretary and Prime Minister, Lord Edward's father, the Marquess of Salisbury, was Britain's leading statesman. His Jacobean palace, Hatfield, was a political powerhouse. Violet's father, Frederick Maxse was an unorthodox war hero and landed gentleman. His artistic and political friends, such as the statesman Georges Clemenceau, influenced her profoundly. Alfred Milner, a brilliant scholarship boy, rose to control the destinies of the nation alongside Lloyd George during World War I - a war bringing terrible personal tragedy to Violet and Edward. Edward spent his later life administering the finances of Egypt. After his death in 1918, Alfred and Violet were married for four brief, happy years.

During their research for this book, the authors travelled extensively to Boer War sites in South Africa and the battlefields of Northern France. They have had unique access to unpublished family documents, diaries and photographs.

Certain lives epitomize an age, its glamour, its successes, and its broken dreams. Such were the lives of the subjects of this biography - Lord Edward Cecil, his wife Violet, and Alfred Milner with whom she fell in love.