Items related to Innocence and Design: Influence of Economic Ideas on...

HENDERSON Innocence and Design: Influence of Economic Ideas on Policy

Innocence and Design: Influence of Economic Ideas on Policy 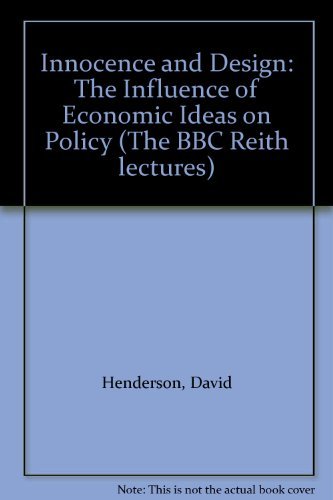 In this controversial discussion, the author addresses Keynes' claim that the world is ruled by the ideas of economists, rather than the pressures of vested interests. Henderson argues that while economic policies are indeed strongly influenced by economic ideas, these are not necessarily the ideas of economists. There are extensive areas of policy in which the beliefs and perceptions that influence government and public opinion alike are unrelated to the characteristic ways of thinking of professional economists, and scarcely changed by the passage of time. In so far as the world is ruled by economic ideas, these are often the ideas of "do-it-yourself economics". The effects on policy, in both rich and poor countries, are a matter of considerable interest and concern.

1. Innocence and Design: The Influence of Economic Ideas on Policy (The BBC Reith lectures)