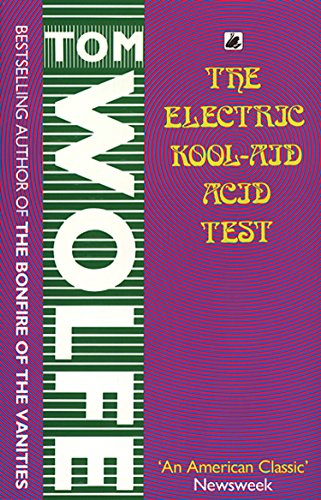 I looked around and people's faces were distorted...lights were flashing everywhere...the screen at the end of the room had three or four different films on it at once, and the strobe light was flashing faster than it had been...the band was playing but I couldn't hear the music...people were dancing...someone came up to me and I shut my eyes and with a machine he projected images on the back of my eye-lids...I sought out a person I trusted and he laughed and told me that the Kool-Aid had been spiked and that I was beginning my first LSD experience...

"The Electric Kool-Aid Acid Test is not simply the best book on the hippies, it is the essential book...the pushing, ballooning heart of the matter" (New York Times)

"A life-changer, a rabble-rouser, a mind-blower, a gathering of the tribes, a call to arms, a manifesto for a new society, a car repair manual, a fly-on-the-paisley-patterned-wall account of a cultural revolution – a masterpiece!" (Jarvis Cocker)

"An amazing book... A book that definitely gives Wolfe the edge on the nonfiction novel" (The Village Voice)

"Every word seems placed with a care and a skill of contrivance... A major journalistic contribution to the future analysis of our own and America's strange period of this century" (Guardian)