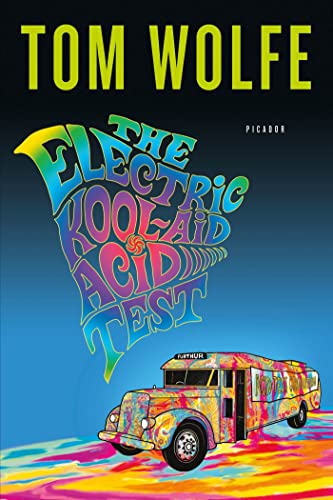 Tom Wolfe's The Electric Kool-Aid Acid Test ushered in an era of New Journalism, "An American classic" (Newsweek) that defined a generation. "An astonishing book" (The New York Times Book Review) and an unflinching portrait of Ken Kesey, his Merry Pranksters, LSD, and the 1960s.

"Tom Wolfe is a groove and a gas. Everyone should send him money and other fine things. Hats off to Tom Wolfe!" --Terry Southern

"The Electric Kool-Aid Acid Test is not simply the best book on the hippies, it is the essential book . . . the pushing, ballooning heart of the matter . . . Vibrating dazzle!" --The New York Times

"An amazing book . . . A book that definitely gives Wolfe the edge on the nonfiction novel." --The Village Voice

"Among journalists, Wolfe is a genuine poet; what makes him so good is his ability to get inside, to not merely describe (although he is a superb reporter), but to get under the skin of a phenomenon and transmit its metabolic rhythm." --Newsweek

Book Description Paperback. Condition: New. Anniversary. Language: English. Brand new Book. One of the most essential works on the 1960s counterculture, Tom Wolfe's The Electric Kool-Aid Test ushered in an era of New Journalism. This is the seminal work on the hippie culture, a report on what it was like to follow along with Ken Kesey and the Merry Pranksters as they launched the Transcontinental Bus Tour from the West Coast to New York, all while introducing acid (then legal) to hundreds of like-minded folks, staging impromptu jam sessions, dodging the Feds, and meeting some of the most revolutionary figures of the day. An American classic (Newsweek) that defined a generation. An astonishing book (The New York Times Book Review) and an unflinching portrait of Ken Kesey, his Merry Pranksters, LSD, and the psychedelic 1960s. Seller Inventory # ABZ9780312427597