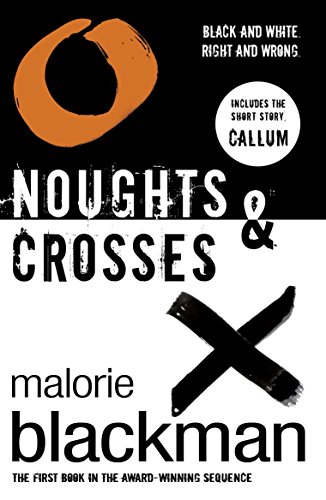 Malorie Blackman is a fine, award-winning author whose work is always inclined to provoke debate amongst her readers, and indeed her peers. With Noughts and Crosses she surpasses expectation not only with her subject matter, but with the execution of a stimulating and provocative plot line that often leaves the reader chilled to the bone.

Sephy and Callum have been best friends since childhood, and now they are older and they realise they want more from each other. But the harsh realities of lives lived in a segregated society are beginning to take their toll: Callum is a nought--a second-class citizen in a world dominated by the Crosses--and Sephy is a Cross, and the daughter of one of the most powerful men in the country. The barriers they would have to cross to be together at first seem little more than minor obstacles to the two idealistic teenagers, but soon those barriers threaten not only their friendship but their lives.

Noughts and Crosses is written with the passion of an author who has a personal message about the perception of the past, present and future, and Blackman has used the clever device of turning preconceived ideas of racial prejudice upside down to make sure that her point is well and truly made. Deeply disturbing and totally absorbing this novel is intriguing from the outset, with a shocking climax that packs an unforgettable punch. (Age 11 and over) --Susan Harrison

"A gritty read for older children . . . At times this is a beautiful love story; at other times it is a harrowing and moral tale..." (Bookseller)

Noughts & Crosses: Special New Edition Including An Eye For An Eye