Items related to Scale: Imagination, Perception and Practice in Architecture... 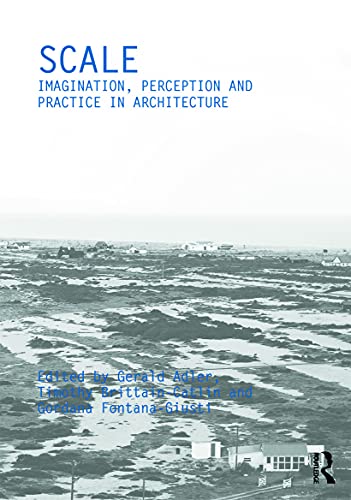 Scale is a word which underlies much of architectural and urban design practice, its history and theory, and its technology. This book considers what is culturally specific about scale.

“Like so many Routledge academic publications, it mines a seam of thought from the edges of accepted discourse. Its wider understandings of the term ‘scale’ stray intelligently into territories beyond conventional architectural thinking.”
– RIBA Journal

Gerald Adler runs the BA (Hons) Architecture programme at the Kent School of Architecture, University of Kent, UK, where he is Deputy Head of School.

Timothy Brittain-Catlin is Senior Lecturer at the Kent School of Architecture.

Gordana Fontana-Giusti is an architect specialising in architectural theory who has been involved in establishing postgraduate studies and research at the Kent School of Architecture.

The editors are members of CREAte, the Centre for Research in European Architecture at the Kent School of Architecture.

Book Description Taylor & Francis Ltd, United Kingdom, 2011. Paperback. Condition: New. Language: English. Brand new Book. Scale is a word which underlies much of architectural and urban design practice, its history and theory, and its technology. Its connotations have traditionally been linked with the humanities, in the sense of relating to human societies and to human form. `To build in scale' is an aspiration that is usually taken for granted by most of those involved in architectural production, as well as by members of the public; yet in a world where value systems of all kinds are being questioned, the term has come under renewed scrutiny. The older, more particular, meanings in the humanities, pertaining to classical Western culture, are where the sense of scale often resides in cultural production. Scale may be traced back, ultimately, to the discovery of musical harmonies, and in the arithmetic proportional relationship of the building to its parts. One might question the continued relevance of this understanding of scale in the global world of today. What, in other words, is culturally specific about scale? And what does scale mean in a world where an intuitive, visual understanding is often undermined or superseded by other senses, or by hyper-reality? Structured thematically in three parts, this book addresses various issues of scale. The book includes an introduction which sets the scene in terms of current architectural discourse and also contains a visual essay in each section. It is of interest to undergraduate and postgraduate students, academics and practitioners in architecture and architectural theory as well as to students in a range of other disciplines including art history and theory, geography, anthropology and landscape architecture. Seller Inventory # BTE9780415687126