Items related to Philosophy: The Classics 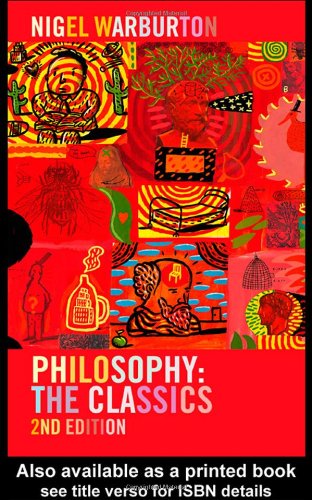 In his exemplary clear style, Warburton introduces and assesses twenty-seven philosophical classics from Plato's Republic to Rawls' A Theory of Justice. For the third edition there is new text design and revised further reading make this the ideal book for all students, while three new chapters on Nietzsche's Beyond Good and Evil, Russell's The Problems of Philosophy and Sartre's Existentialism and Humanism mean that all the A Level set texts are covered. This brisk and invigorating tour through the great books of western philosophy explores the works of Plato, Aristotle, Boethius, Machiavelli, Descartes, Hobbes, Spinoza, Locke, Hume, Rousseau, Kant, Schopenhauer, Mill, Kierkegaard, Marx and Engels, Nietzsche, Russell, Ayer, Sartre, Wittgenstein, and Rawls. Offering twenty-seven guidebooks for the price of one, this is the most comprehensive introduction to philosophers and their texts currently available.

The second edition of this best-seller includes four entirely new chapters on classics by Boethius, Machiavelli, Spinoza and Rawls. In his inimitable style, Nigel Warburton takes us on a guided tour through philosophy's greatest works, from Plato's Republic to Wittgenstein's Philosophical Investigations. Each chapter explores a key classic text, identifying and explaining core themes as well as subjecting them to critical scrutiny.
These classic texts deal with problems that are as important today as when they were written, and Philosophy: The Classics offers an accessible introduction for all those who hesitated to approach them - until now.

'Nigel Warburton rises to the challenge with admirable skill' - Roger Scruton, The Times