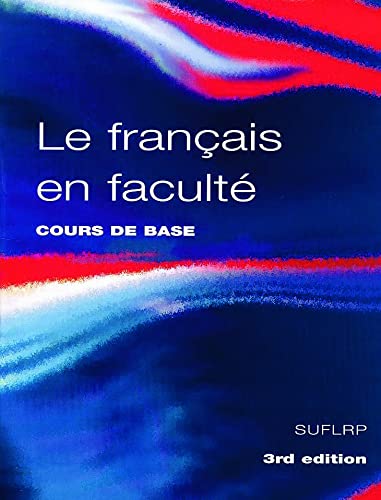 Comprises twelve thematic modules each including a relevant text based on an aspect of French life and culture, associated exercises, and a section on grammar.

Robin Adamson is Honorary Research Fellow at the University of Western Australia, working on contemporary French language. For many years she was Director of the Centre for Applied Language Studies at the University of Dundee, where she worked mainly in the fields of second language acquisition, communicative language teaching and discourse analysis, and also contributed extensively to the new generation of university textbooks such as Le fran?ais en facult?. She became an officier in the Ordre des palmes acad?miques in 1989. Her interest in the defence of French springs from a lifelong passion for the language and the discovery that among her Scottish ancestors are several who died defending France.

Hare is a former Senior Lecturer in French Studies and is now a Research Associate at the University of Newcastle upon Tyne.

James Julian Coleman, Jr., a native New Orleanian, came from a Louisiana family that has long been associated with the Mississippi River and its commerce. His great-grandfather owned a rice plantation and constructed there the first rice mill to be built in the South; it was at Pointe-a-la-Hache in Plaquemines Parish where St. Maxent built Fort St. Philip. Coleman, who studied at Princeton, Oxford, and Tulane, was the youngest man ever to address the Louisiana Historical Society.

Substantially revised and updated, this is the third edition of a highly popular book which has been helping students for decades. It provides a sound base of linguistic competence upon which students can build with confidence. Comprises twelve thematic modules each including a relevant and contemporary text based on an aspect of French life and culture, associated exercises, and a section on grammar.