Items related to The King's English 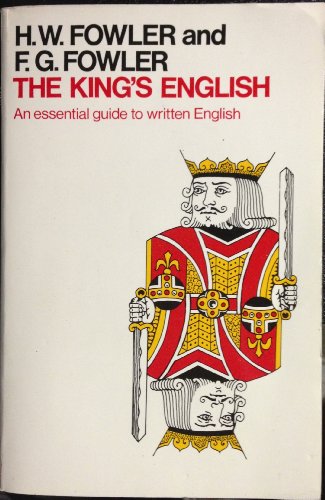 Had Dickens owned a copy of The King's English he would not have written `your great ability and trustfulness'; he would have recognized the malapropism and realized that the context demanded `trustworthiness'. In this classic reference book the Fowler brothers illustrate by example all the blunders of English usage that are commonly made, and guide the reader to improved expression and style. * The essential guide to written English * Examples taken from famous authors and newspapers * The ideal companion to Fowler's Modern English Usage `deserves a garland ...the most concise and exhaustive study of the English language.' Spectator `such a pleasure to read and so straightforward in its explanations that one concedes all one's errors and aberrations with good grace.' Keith Waterhouse, Good Book Guide This book is intended for writers; students and teachers of English grammar and syntax; anyone wanting practical guidance on written English.

Henry Watson Fowler (1858-1933) and Frank (Francis) George Fowler (1870-1918) were translators, lexicographers, and grammarians. Together they compiled the first edition of the Concise Oxford Dictionary (published 1911) and the Pocket Oxford Dictionary (published in 1924, after Franks' death). Henry Fowler is also the author of Modern English Usage (planned by the two brothers but executed by Henry alone), and the name Fowler has become synonymous with reliable and accurate reference on all aspects of written English.

2. The Kings English: An Essential Guide to Written English (Paperback)