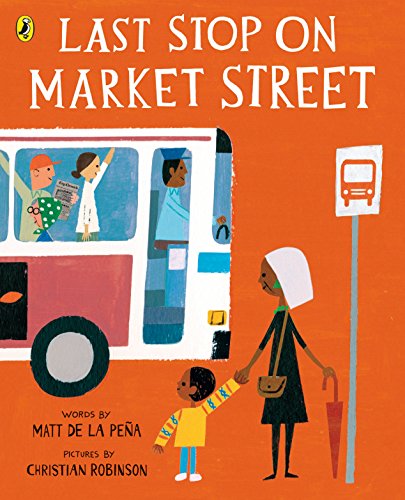 Sometimes when you're surrounded by dirt, CJ, you're a better witness for what's beautiful."

CJ begins his weekly bus journey around the city with disappointment and dissatisfaction, wondering why he and his family can't drive a car like his friends. Through energy and encouragement, CJ's nana helps him see the beauty and fun in their routine.

Last Stop on Market Street has won multiple awards and spent time at the number one spot in the New York Times Bestseller List.

"It's also the warmth of their intergenerational relationship that will make this book so satisfying, for both young readers and the adults sharing it with them."--The New York Times Book Review

"That material poverty need not mean spiritual or imaginative poverty becomes beautifully clear in the quietly moving pages of 'Last Stop on Market Street," a picture book by Matt de la Peña filled with Christian Robinson's vibrant naïf illustrations."--The Wall Street Journal "Matt de la Peña's warmhearted story is musical in its cadences...Christian Robinson's angular, bright illustrations are energetic and vibrant... [A] celebration of the joys of service, the gifts of grandmothers and the tenderness that the city can contain."--The Washington Post "The sharp illustrations -- in bold, and cheerful primaries -- get CJ's restless energy and curious postures exactly right. The voices of CJ and his grandmother carry the story along in subtle point and counterpoint so that at this book's quiet close you feel like you've been listening to a song."--The Boston Globe ★ "This celebration of cross-generational bonding is a textual and artistic tour de force."--Kirkus Reviews, starred review ★ "Like still waters, de la Peña and Robinson's story runs deep. It finds beauty in unexpected places, explores the difference between what's fleeting and what lasts, acknowledges inequality, and testifies to the love shared by an African-American boy and his grandmother."--Publishers Weekly, starred review ★ "De la Peña and Robinson here are carrying on for Ezra Jack Keats in spirit and visual style. This quietly remarkable book will likely inspire questions... it will also have some adult readers reaching for a tissue."--The Horn Book, starred review "The urban setting is truly reflective, showing people with different skin colors, body types, abilities, ages, and classes in a natural and authentic manner... A lovely title."--School Library Journal "It's not often that you see class addressed in picture books in ways that are subtle and seamless, but Last Stop on Market Street, the affectionate story of a young boy and his grandmother, does just that...This ode to gratitude is 2015's first must-read picture book."--BookPage

"If Robinson doesn't win this year's Caldecott, then next year could be the one with his name on it. His remarkable Last Stop on Market Street (with Matt de la Peña), is an early favorite for the best picture book of 2015."--Huffington Post Books

★ "With the precision of a poet, Matt de la Peña chronicles a boy's heartwarming Sunday morning routine with his nana. Christian Robinson's uplifting palette and culturally diverse cast brightens the rainy-day backdrop."--Shelf Awareness, starred review "Bright colors and streamlined shapes keep the urban setting and its denizens cheerful, emphasizing the positive message."--Bulletin of the Center for Children's Books "This story is full of figurative language and the art provides a distinct contemporary feel to support this urban story."--SLC
About the Author:

Matt de la Peńa is the New York Times Bestselling, Newbery Medal-winning author of young adult novels and critically-acclaimed picture books. His short fiction and essays have appeared in the New York Times and various literary journals. He currently lives in Brooklyn, New York, where he teaches creative writing. You can visit Matt and find out more about his books at mattdelapena.com and follow him on Twitter at @mattdelapena.

Book Description 2017. Paperback. Condition: New. Paperback. Sometimes when you're surrounded by dirt, CJ, you're a better witness for what's beautiful.CJ begins his weekly bus journey around the city with disappointment and dissatisfaction, wonderi.Shipping may be from multiple locations in the US or from the UK, depending on stock availability. 32 pages. 0.190. Seller Inventory # 9780141374185

Book Description 2017. Paperback. Condition: New. Paperback. Sometimes when you're surrounded by dirt, CJ, you're a better witness for what's beautiful.CJ begins his weekly bus journey around the city with disappointment and dissatisfac.Shipping may be from our Sydney, NSW warehouse or from our UK or US warehouse, depending on stock availability. 32 pages. 0.190. Seller Inventory # 9780141374185