Items related to The Histories (Classics) 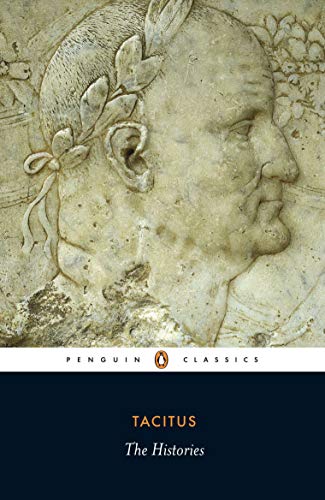 AD 69, the year following Nero's suicide and marking the end of the first dynasty of imperial Rome, was one of the most dramatic and dangerous in the city's history. In the surviving books of his Histories, the great barrister-historian Tacitus gives a gripping account of the 'long but single year' that saw the reigns of four emperors: disciplinarian Galba; conspirator and dandy Otho; unambitious hedonist Vitellius; and pragmatic victor Vespasian, who went on to establish the Flavian dynasty. In a narrative that extends from Britain to Egypt and from the Caucasus to Morocco, taking in revolt, conspiracy, battles and murder, Tacitus portrays history in terms of human sagacity and folly, pathos and heroism - and, ultimately, chance and fate.

" In all the records of Rome there can scarcely be another year that is so full of calamity, or that displays so clearly the strength and weakness of the Romans."
-Kenneth Wellesley, from his original introduction to "The Histories"

'The period upon which I embark is one full of incident, marked by bitter fighting, rent by treason, and even in peace sinister'

In AD 68 Nero's suicide marked the end of the first dynasty of imperial Rome. The following year was one of drama and danger. In the surviving books of his Histories the barrister-historian Tacitus, writing some thirty years after the events he describes, gives a detailed account of the 'long but single year' when four emperors emerged in succession: Galba, the martinet; Otho, conspirator and dandy; Vitellius, the unambitious hedonist; and the ultimate victor, Vespasian, who established the Flavian dynasty. With great vividness and emotional power, Tacitus' gripping narrative lays bare corruption, injustice and folly, and sheds lasting light on the nature of power.

This revised version of Kenneth Wellesley's translation has sensitively updated it to render it more accessible to the modern reader. This edition contains a new introduction by Rhiannon Ash discussing Tacitus' life and his contemporary audience, a note on the text, further reading, a glossary of place and peoples, expanded notes and a chronology.