Items related to Notes from the Hyena's Belly: Memories of my Ethiopian...

Mezlekia, Nega Notes from the Hyena's Belly: Memories of my Ethiopian Boyhood

Notes from the Hyena's Belly: Memories of my Ethiopian Boyhood 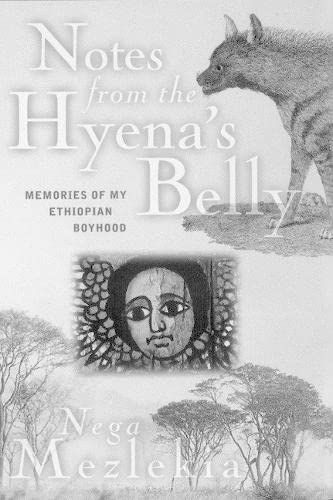 In this powerful memoir, Nega Mezlekia recalls in vivid detail his boyhood in the arid city of Jijiga, Ethiopia, and his coming of age in the 1970s and 1980s, his country's most turbulent period. In a narrative that sparkles with wit, Mezlekia traces his own personal journey from boy to man. The book teems with the smells, sights and sounds of life in the Horn of Africa - its violent, ingenious humans and its underworld of screeching monkeys, lions and hyenas.

"[A] powerful memoir . . . By skillfully interweaving personal history, politics, and Amhara fables . . . [Mezlekia] has produced the most riveting book about Ethiopia since Ryszard Kapuscinski's literary allegory The Emperor and the most distinguished African literary memoir since Soyinka's Ake appeared 20 years ago . . . Mezlekia has summoned with imaginative directness and impressive tonal range, a world of uncertainty in which politics is never just background but permeates ordinary life." --Rob Nixon, The New York Times Book Review

"[Mezlekia] describes his experience as a member of a revolutionary student cell, his naive enlistment as a teen-age guerilla with the Somalis, and his survival of imprisonment, famine and near-death by firing squad with the vivid swiftness of a Stephen Crane story." --The New Yorker

"Nega Mezlekia's noteworthy memoir of growing up in Ethiopia is likely to tell readers far more than they previously knew about that embattled country . . . His book is as much a survivor's tale as it is a painstaking record of a country devouring itself." --Washington Post

"Notes From the Hyena's Belly is not only a memoir, it is also a vital political and social commentary about the state of affairs in Ethiopia." --African Sun Times

"His memoir tells us much about Ethiopia and much more about the human capacity to survive, even to thrive, in the midst of calamity." --Boston Sunday Herald

"Spirited . . . A very welcome and much-needed contribution to the literature of the continent." --Newsday

"Topical, moving, and fascinating. Nega Mezlekia concentrates his mind on his nation's history as he tells his own tale in prose imbued with a sense of commitment to truth. It is the best memoir by an Ethiopian that I've ever read." --Nuruddin Farah, author of Maps and Secrets

"Notes from the Hyena's Belly is a lyrical memoir and a guide to the troubled recent history of Ethiopia. Growing up in Ethiopia during the fall of the Emperor Haile Selassie (whose reign Ryszard Kapuscinski chronicled in The Emperor), Mezlekia's formative years were filled with famine, war, and tremendous social and political upheaval. Despite such troubles Mezlekia's memoir is most engaging--it sheds light not only on the violence and disorder that beset his native country, but also on the rich spiritual and cultural life of Ethiopia. Through droughts, floods, imprisonment, and unfathomable killing sprees at the hands of military juntas, Mezlekia perseveres, and his lyrical tale bears witness to a world few Westerners have come to know. Part coming-of-age story and part front-lines reportage, Notes from the Hyena's Belly is a swift-moving journey that's never less than gripping." --BookSense.com

"A glimpse into Hell. By some feat of alchemy, Mezlekia has transformed the nightmare that was his life in Ethiopia into a gripping story. Mandatory reading for anyone trying to understand Africa today." --Eric McCormack, author of First Blast of the Trumpet Against the Monstrous Regiment of Women

"A masterful narrative that steeps the reader in Ethiopian folklore, myth, theology, and philosophy, blurring the boundaries between the spiritual and material worlds. Rich in wisdom, humor, and poetry, this is not simply the story of a boy coming of age, it is a portrait of a nation and its people." --George Makana Clark, author of The Small Bees' Honey

"Magical . . . What makes Nega Mezlekia's memoir such a delight is the wonderment, at crazy life and crazier fate, that informs every page." --Charles Foran, author of The Story of My Life (So Far)

"Mezlekia has a born storyteller's knack for pacing, and in his musical voice he manages to convey the helter-skelter of his existence . . . A story of high drama told with aplomb." --Kirkus Reviews

"In telling his life story, Mezlekia describes in rich detail the turmoil and upheaval of Ethiopia after the fall of Emperor Haile Selassie and the rise of a communist junta and its 'Red Terror.' He recalls an early childhood full of stories and myths, with which he salts his accounting of biographical and historical specifics. As he matured and realized the injustices of Ethiopia's feudalism, he joined youth rebellions seeking reform. At 18 he was forced to join a guerrilla army as the social and political structure of Ethiopia collapsed in a struggle between western European interests and communist influence. Hungry for reform, he was disillusioned with a communist rhetoric that was accompanied by only slight change in the status of the downtrodden. Corruption was rampant, even as the general population faced famine, political 20unrest, economic chaos, and terrorism. Mezlekia left Ethiopia in 1983 and eventually emigrated to Canada. A stunning depiction of Ethiopia's current culture and conflict." --Vanessa Bush, Booklist

"Born in 1958, the year he calls 'the year of paradox, ' Mezlekia has written an intriguing book about growing up in Jigiga, Ethiopia. Full of adventure, political struggle, and intrigue, his memoir works as a coming-of-age story as well as a glimpse into a world of political corruption and change that Westerners rarely get to know so intimately. Mezlekia writes, 'We children lived like the donkey, careful not to wander off the beaten trail and end up in the hyena's belly.' He describes the careful divisions in dress, language, and culture between Muslims and Christians and brings them to life through vivid portraits of the people who populated his landscape. Mustafa and Ms. Yetaferu, two permanent houseguests, provide beautiful insight into these two religious and cultural stances in life. Mustafa's business adventures and Ms. Yetaferu's religious ceremonies stand in contrast to each other, creating a dynamic household. Mezlekia's tales of the spiritual and religious beliefs are some of the most fascinating parts of his life. He honors us with the telling of this rich story." --Barbara O'Hara, Free Library of Philadelphia, Library Journal

"He treats the chaos and famine that enveloped his country with seriousness and style--even while recounting famine and war, he never loses the wit that no doubt helped him to survive some of the worst humanity has to offer." --Publishers Weekly

In this powerful memoir, Nega Mezlekia recalls in vivid detail his boyhood in the arid city of Jijiga, Ethiopia, and his coming of age in the 1970s and 1980s, his country's most turbulent period. In a narrative that sparkles with wit, Mezlekia traces his own personal journey from boy to man. We meet Wondwossen, his best friend and collaborator in mischief; Mr. Alula, their embattled teacher; Mr. Tadesse, full-time school director and part-time poacher; Ms. Yetaferu, the Orthodox Christian boarder who manages to find a saint to worship each day of the year and thus to avoid gainful employment; and Yeneta, the local priest who is privy to the languages of heaven and hell. Mezlekia describes the difficulties that consumed Ethiopia after the fall of Emperor Haile Selassie and the rise to power of the communist junta, whose merciless Red Terror slaughtered 100,000 Ethiopian youths. Mezlekia himself was forced, at the age of 18, to joina a guerrilla army, and had several brushes with death at the hands of reactionary exorcists, but he somehow survived the bloodbath.

"Notes from the Hyena's Belly" teems with the smells, sights and sounds of life in the Horn of Africa - its violent, ingenious humans and its underworld of screeching monkeys, lions and hyenas. Part autobiography and part social history, this is an unforgettable portrait of a world where the boundaries of credulity are challenged daily. Out of this rich, sundrenched land where modern corruption rides ancient custom like a hungry bird of prey, Mezlekia crafts a world elegant in its aridity, extreme in its absurdity and vast in its ironies.

1. Notes from the Hyena's Belly

2. Notes From The Hyena's Belly

4. NOTES FROM THE HYENA'S BELLY