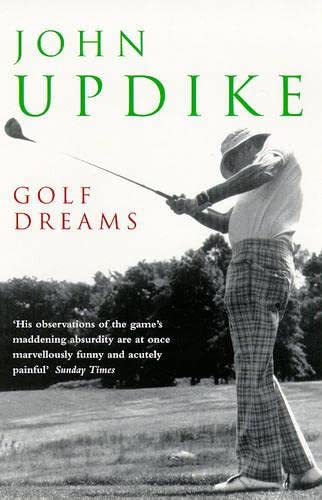 As a golfer for almost forty years, John Updike has written frequently about the game. This gathering of his pieces covers everything from the peculiar charms of bad golf and the satisfactions of an essentially losing struggle to the camaraderie of good golf and its own attendant perils.

"Limber and sprightly, unique, alive . . . Updike understands golf, keenly, and expresses his understanding with charm and beauty, in words as sturdy as Lee Trevino's stance."--Sports Illustrated

"A book written under a clear blue sky with an utterly pure swing . . . Here, Updike waltzes about the heavens of Nabokov, in pure esthetic bliss. And here his transcendental agonies and anxieties fuse into split-second moments of impact that lift us from sand pit to rhapsody."--The Philadelphia Inquirer

"[Golf Dreams clears] the hazards with ease and grace. [Updike] is eloquent on the pleasures and frustrations of the game [and] even better at dramatizing its mysterious pull."--The New York Times About the Author:

John Updike was born in 1932 in Shillington, Pennsylvania. He is the author of over fifty books, including The Poorhouse Fair; the Rabbit series (Rabbit, Run; Rabbit Redux; Rabbit Is Rich; Rabbit At Rest); Marry Me; The Witches of Eastwick, which was made into a major feature film; Memories of the Ford Administration; Brazil; In the Beauty of the Lilies; Toward the End of Time; Gertrude and Claudius; and Seek My Face. He has written a number of collections of short stories, including The Afterlife and Other Stories and Licks of Love, which includes a final Rabbit story, Rabbit Remembered. His essays and criticism first appeared in publications such as the New Yorker and the New York Review of Books, and are now collected into numerous volumes. Collected Poems 1953-1993 brings together almost all of his verse, and a new edition of his Selected Poems is forthcoming from Hamish Hamilton.

Updike graduated from Harvard College in 1954, and spent a year at Oxford's Ruskin School of Drawing and Fine Art. From 1955 to 1957 he was a member of staff at the New Yorker, and he lived in Massachusetts from 1957 until his death in January 2009.