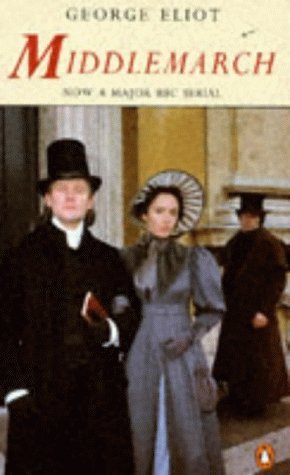 "Perhaps the greatest novel of them all... An enormous canvas and a vast and poignant range of character...a marvellous portrait of nineteenth-century provincial life"

"In Middlemarch George Eliot's serious intelligence produced a novel that no one else could have been capable of - a picture of society as an organic, living, breathing synthesis - order and disorder, hope and hopelessness, pride and humility, charity and greed."

In Middlemarch George Eliot gives us a portrait of provincial life in Victorian England that has never been surpassed.

Wit, irony, pathos and brilliant insight into human nature colour every strand of plot and every beautifully drawn character. Foremost among these and Dorothea Booke, passionate to use her spirit and talent in a wider world than that typically afforded to women in the 1830s; Casuabon, the dry, jealous academic; Doctor Lydgate, who dreams of pioneering research in medical science; spoilt, pretty Rosamond Vincy who sees as 'a man whom it would be delightful to enslave'.

The novel centres on the marriages of Dorothea and of Lydgate, and on the web of relationships that connects us to each other. While eagerly awaiting the next part of the Middlemarch serial in 1872, the Spectator critic declared that 'Middlemarch bids more than fair to be one of the great books of the world'.