Items related to What is History?: The George Macaulay Trevelyan Lectures...

What is History?: The George Macaulay Trevelyan Lectures Delivered in the University of Cambridge January-March 1961 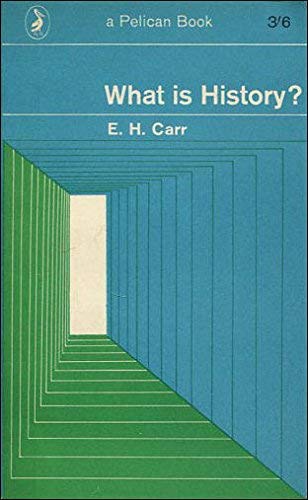 Since its first publication in 1961 E.H. Carr's What is History? has established itself as the classic introduction to the subject. Ranging across topics such as historical objectivity, society and the individual, the nature of causation, and the possibility of progress, Carr delivered an incisive text that still has the power to provoke debate today. For this fortieth anniversary reissue, Richard J. Evans has written an extensive new introduction that discusses the origins and the impact of the book, and assesses its relevance in the age of twenty-first century postmodernism and epistemological anxiety.

'E.H. Carr...now proves himself to be not only our most distinguished modern historian, but also one of the most valuable contributors to historical theory.' - Spectator
'As a lively, challenging view of the purpose of historical inquiry and the role of the historian...What is History? has yet to be bettered.' - David Horspool, Times Literary Supplement

'There is simply no point in talking about the principles and methodology of historical research without referring to E.H. Carr's seminal work.' - Elliot Jager, The Jerusalem Post

'By situating Carr's book historically so well, Evans...[has] provided the strongest argument yet for leaving What is History? on the shelf as a theory-of-history primer for undergraduates and for its alternative use as valuable primary evidence for the history of intellectual politics in mid-20th century Britain.' - Simon Ditchfield, Times Higher Education Supplement

'Carr's What is History? is still essential reading for all historians. The new edition introduced by Professor Evans, a leading historian and an accomplished historiographer, provides an excellent insight into Carr's life and work.' - Jonathan Haslam, author of The Vices of Integrity: E. H. Carr (1892-1982)

'E. H. Carr...proves himself to be not only our most distinguished modern historian, but also one of the most valuable contributors to historical theory.' - The Spectator

E.H. CARR who died in 1982 at the age of ninety was a Fellow of Trinity College, Cambridge, UK, and an Honorary Fellow of Balliol College, Oxford, UK. His books include International Relations between the Two World Wars 1919-1939, The Twenty Years' Crisis 1919-1939, Nationalism and After, The New Society, What is History?, 1917: Before and After, Michael Bakunin, The Russian Revolution From Lenin to Stalin 1917-1929, the fourteen volume History of Soviet Russia and The Twilight of the Comintern 1930-1935.

RICHARD J. EVANS is Professor of Modern History at University of Cambridge and author of In Defence of History.

What Is History (Pelican)