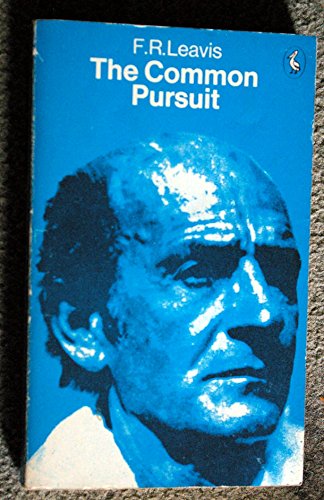 F.R. Leavis was born in 1895 in Cambridge, where he would live and teach for most of the rest of his life. He volunteered as a stretcher-bearer in the First World War, and was badly gassed on the Western Front. Appointed Director of Studies in English at Downing College, Cambridge, in 1930, he remained there for the next thirty years, often at odds with the University establishment. In 1932 he and his wife Queenie Roth founded the hugely influential journal Scrutiny, which ran until 1953. He was one of the most important figures in the development of modern literary criticism, and in the elevation of English as a serious academic subject. He died in 1978.

Book Description Penguin, 1975. Paperback. Condition: Used; Good. Dispatched, from the UK, within 48 hours of ordering. This book is in good condition but will show signs of previous ownership. Please expect some creasing to the spine and/or minor damage to the cover. Aged book. Tanned pages and age spots, however, this will not interfere with reading. Damaged cover. The cover of is slightly damaged for instance a torn or bent corner. Seller Inventory # CHL5841057