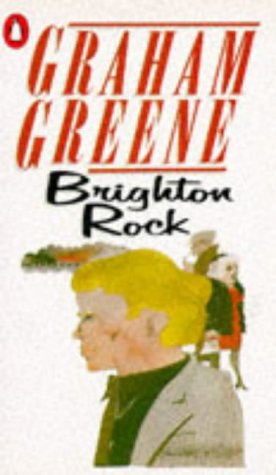 A gang war is raging through the dark, seedy underworld of Brighton. Pinkie, fighting for leadership, is only seventeen yet he has already proved his ruthlessness in the brutal killing of Hale, a journalist. Untouched by human feeling, Pinkie is isolated from the rest of the world, a figure of pure evil. Believing he can escape retribution, he its unprepared for the courageous, life-embracing Ida Arnold, who is determined to avenge Hale's death. This gripping thriller exposes a world of loneliness, pain and fear, of life lived on 'the dangerous edge of things'.

With this brilliant portrayal of crime and punishment, Greene proved that the thriller need not be pulp fiction. When Pinkie, the tormented Catholic, encounters his unlikely nemesis in Ida, Green means to show that there is justice and vengeance in this life as well as in the world beyond death. (Kirkus UK)

A blend of horror, adventure, mystery and morbid realism for this weird, sometimes original story of murders at Brighton Rock, the London Coney Island. An unprepossessing Londoner on a Bank Holiday is the first victim and his friend of the day investigates the murder, which was done by Pinkie, a boy of 17, heading a gang of racing racketeers, whose rule is threatened by another more powerful gang. Perversed, abnormal, dwarfed, the "Boy" goes from one razor cutting to another in his attempt to cover his initial crime, is forced to marry a young girl who holds the clue to the first killing, though he hates women and despises his own impotency. And in the end - inevitable defeat for the "Boy". For this type of thing, overlong and occasionally repetitive, with some unconvincing elements. But there is a good sense of the tawdry scene and the crowds, and considerable originality with interesting psychological touches to the characterization. Plus sale in the mystery section. (Kirkus Reviews)