Items related to Mere Christianity: An Anniversary Edition of the Three...

Mere Christianity: An Anniversary Edition of the Three Books 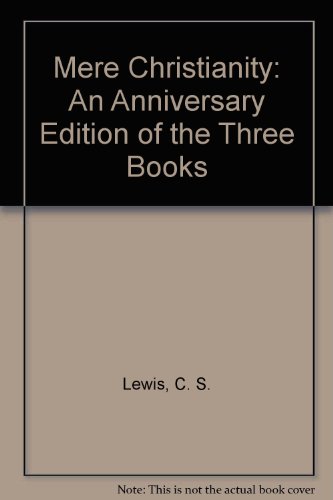 In 1943, when hope and the moral fabric of society in Britain were threatened by the relentless inhumanity of global war, an Oxford don was invited to give a series of radio lectures addressing the central issues of Christianity. Over half a century after the original lectures, the topic retains its urgency. Expanded into book form, Mere Christianity never flinches as it sets out a rational basis for Christianity and builds an edifice of compassionate morality atop this foundation. As Mr Lewis clearly demonstrates, Christianity is not a religion of flitting angels and blind faith, but of free will, an innate sense of justice and the grace of God.

‘He has quite a unique power for making theology an attractive, exciting and fascinating quest.’ Times Literary Supplement

‘Lewis seeks in Mere Christianity to help us see religion with fresh eyes, as a radical faith whose adherents might be likened to an underground group gathering in a war zone, a place where evil seems to have the upper hand, to hear messages of hope from the other side.’ Kathleen Norris