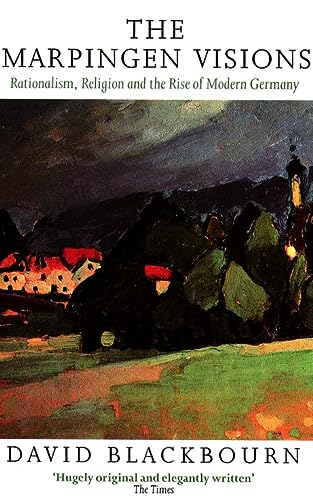 In 1876, three eight-year-old girls from the German village of Marpingen bore witness to visions of the Virgin Mary.Their claims triggered a remarkable sequence of events that eventually humbled the authoritarian Prussian government. This celebrated case reveals the unique, half-medieval, half-modern world of German culture during the 1870's, as Bismarck, using all available means, tried to transform a new, recently united country into a modern industrial state. The visions attracted thousands upon thousands of pilgrims. For a while, Marpingen was the German Lourdes and claims of miracle cures abounded. This religious revival led to parliamentary diecussions, a bloody military clampdown and dramatic show-trial which ended in humiliating defeat for the Prussian state. This account is a combination of detective story, historical study, and an investigation of the power of superstition.

In 1876, three eight-year-old girls from the small German village of Marpingen bore witness to a series of extraordinary visitations from the Virgin Mary. Their visions attracted tens of thousand of pilgrims and prompted numerous claims of miraculous cures. These in turn triggered military intervention, the dispatch of an undercover detective, parliamentary debate and a dramatic trial which culminated in the unexpected humbling of the authoritarian Prussian government.

In this riveting and meticulously researched book, David Blackburn powerfully depicts the half-modern Germany of the 1870s, as Bismarck and his liberal allies tried to transform a recently united country into a modern industrial state. This is a book which ranges boldly across the fields of social, cultural and political history to tell the engrossing story of the place dubbed the ‘German Lourdes’. It is an important work, brimming with contemporary resonances, by one of the world’s leading historians of nineteenth-century Germany.

“Fascinating...David Blackbourn’s book provides a beautifully balanced account of the Marpingen events and their aftermath. Mr Blackburn has a sure sense of the human dimensions of the story, but never loses sight of the larger political, social, cultural and legal developments that provide its historical setting and significance.”
JAMES J. SHEEHAN, 'New York Times Book Review'

“This work is full of human interest and pregnant with implications for the history of modern Germany.”
DANIEL JOHNSON, 'The Times'

Buy Used
Wear and Tear to cover. stains... Learn more about this copy

1. The Marpingen Visions: Religion, Rationalism and the Rise of Modern Germany

Book Description Fontana Press, 1995. Paperback. Condition: Used; Good. Wear and Tear to cover. stains on the side **SHIPPED FROM UK** We believe you will be completely satisfied with our quick and reliable service. All orders are dispatched as swiftly as possible! Buy with confidence!. Seller Inventory # 3911444

2. The Marpingen Visions: Religion, Rationalism and the Rise of Modern Germany

Book Description Fontana Press, 1995. Paperback. Condition: Very Good. New Ed. Marpingen Visions: Religion,Rationalism & Rise of Modern Germany: Religion, Rationalism and the Rise of Modern Germany This book is in very good condition and will be shipped within 24 hours of ordering. The cover may have some limited signs of wear but the pages are clean, intact and the spine remains undamaged. This book has clearly been well maintained and looked after thus far. Money back guarantee if you are not satisfied. See all our books here, order more than 1 book and get discounted shipping. . Seller Inventory # 7719-9780006863410